Treatment of Lyme disease is perhaps one of the most controversial subjects in medicine. The best way to treat Lyme disease is embroiled in a highly political debate.  Some medical professionals believe that Lyme disease is an easily treatable, self limiting infection whereas others believe it’s an insidious disease, capable of evading the immune system and persisting beyond a short course of antibiotics, therefore requiring long term treatment.

Regardless, persistence of Lyme disease after antibiotic treatment has been demonstrated in both animals and humans. This article from lymedisease.org explains further. 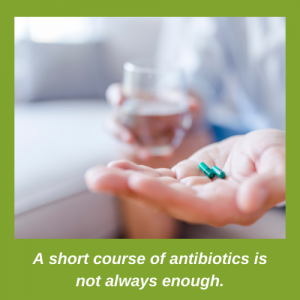 Public Health England’s current stance tends to lean towards the Infectious Diseases Society of America’s (IDSA) view which doesn’t acknowledge Lyme disease as a chronic infection and short courses of antibiotics are generally recommended. Any symptoms that persist beyond treatment are often accredited to a condition known as Post-Lyme Disease Treatment Syndrome. One study conducted in the US showed that more than 50% of  patients were still ill 6-12 months after a short term course of antibiotics, arguing the case for re-treatment. The NICE guideline for Lyme disease was published in 2018 and this is now the advice most doctors in the UK will follow.

Doctors who form the International Lyme and Associated Disease Society (ILADS) tend to recognise the need for longer courses of integrative treatment in some cases due to the persistent nature of the disease and take into account co-infections and other aspects of chronic illness which may be contributing to symptoms.

The debate has divided the medical community and effectively lead to two standards of care. Doctors who do treat patients for longer than the recommended short course of antibiotics may feel as though their licenses are under threat and patients are caught in the middle of the argument, often not knowing which way to turn.

As many NHS doctors do not tend to recognise chronic Lyme disease, patients who are still unwell after receiving a short course of treatment for Lyme disease are usually forced to seek private or alternative treatment if they can afford to do so. As there are so few Lyme literate practitioners in the UK, this often involves trips abroad. There is also the issue of patients who were never treated during the onset of their illness and who have been misdiagnosed with other conditions for years.

Some patients choose to use a mixture of treatments from both conventional and alternative medicine.  As there is so little research into the most effective treatment for late stage, chronic Lyme disease and its associated conditions, people usually discover that different treatment options suit different people and that there is no standard protocol.

Many of the Lyme literate practitioners look beyond simply a Borrelia infection and examine their patients for co-infections, opportunistic infections, hormonal imbalances, nutritional deficiencies, food intolerances, heavy metal or mould toxicity and many other pieces of the often complex puzzle.

If all causes of a patient’s chronic illness are addressed, Lyme literate practitioners usually believe that remission is possible but they are often wary of using the term ‘cure’ because there is a chance of relapse as these infections possess the ability to go dormant and reactivate if the body is under stress.

If you would like to find out more about treatment options for Lyme disease or find an experienced Lyme literate practitioner, please join our Online Community on Facebook where people share their experiences. There are also many books available on the complexities of Lyme disease and chronic illness.

Ensure that at the very least, your doctor is aware of the NICE Lyme disease guideline and the RCGP e-learning course, and that you are receiving the treatment you are entitled to if Lyme disease is suspected.