Lyme disease is caused by Borrelia, a spirochete bacteria. It’s the most common tick-borne infectious disease in the northern hemisphere and there are multiple strains of the bacteria. Lyme disease is endemic in many parts of the United Kingdom, particularly in woodland or heath-land areas but disease carrying ticks can also be found in cities and gardens. Take a look at the image below of a tick that’s been removed with a tick removal tool,  would you have been able to spot it? 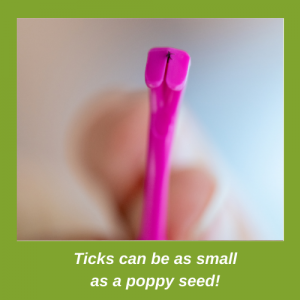 Transmission of Lyme disease can occur when bitten by an infected tick.

Other modes of transmission include congenital transmission from mother to baby. Although Borrelia has been found in biting insects such as mosquitoes and spiders, there is not yet enough research to prove that the disease can be transmitted via them.

Blood, tissue and organ donation, along with sexual transmission are all cause for concern, but again there is not enough research being done in this area. The CDC state that, “Although no cases of Lyme disease have been linked to blood transfusion, scientists have found that the Lyme disease bacteria can live in blood that is stored for donation.” Until more is known, it would be wise for Lyme patients past and present, to avoid donating their blood or tissue and we aim to continue raising the issue with the Department of Health.

Symptoms can start with an erythema migrans (EM) rash, often described as a bulls-eye rash, but the rash can also be more irregular, which sometimes leads to a misdiagnosis of ringworm or cellulitis. 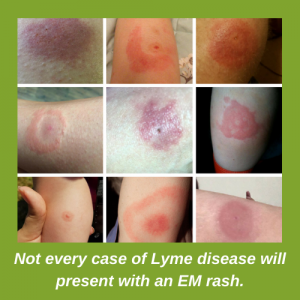 Not every Lyme disease patient will experience or remember a rash…

It’s important to note that not every Lyme disease patient will experience or remember a rash, as figures state that the rash appears in two out of every three Lyme patients. The rash may not appear straight away. We advise people to draw a ring around suspicious looking rashes to track any potential changes.

Symptoms of Lyme disease can include malaise, unexplained flu-like symptoms, soreness and achiness, light and noise sensitivity, cognitive problems, fatigue, a stiff neck, facial palsy, numbness and tingling. Left untreated, the infection can spread anywhere in the body leading to around 70 recognised symptoms. People can develop issues with their endocrine and neurological systems and experience musculoskeletal, cardiac, dermatological and neuropsychiatric problems.

At present, there is no test which can rule out Lyme disease as current testing is flawed. False negative results are possible and there is also no test to show you have been cured.

If caught early, Lyme disease can be easy to treat. However, complications can occur if the infection is left untreated. ‘Chronic Lyme disease’ is not a medically accepted term in the UK. However, independent Lyme treating practitioners use it to describe long-term symptoms and complications associated with the disease. and also what happens if the patient is not diagnosed early on after being infected or if initial treatment has failed.

Persistence of Lyme disease after antibiotic treatment has been demonstrated in both animals and humans. This article from lymedisease.org explains further. It is also thought by some members of the medical and scientific community that the presence of other infections, could be a possible reason for a wide variation in disease patterns, progression and treatment outcomes.

Lyme disease can be a complex condition and many aspects of the illness are contested and debated.

There is variability in knowledge among NHS clinicians. Some have little or no knowledge of Lyme disease and others are updating their knowledge by familiarising themselves with the NICE Lyme disease guideline and completing the RCGP Lyme disease course.

Many patients, frustrated by the lack of care they receive on the NHS, turn to private doctors and clinics, many of which are overseas.