We need better testing which is universally accepted. Current testing is flawed and and there is no test available to indicate when the infection has been eradicated.

The initial test offered by the NHS is called an ELISA test which is usually performed at your local hospital laboratory and takes a few days or possibly a week to come back. Although there have been no specific studies to find out the percentage of false negatives in the UK, the reliability of the ELISA test appears to be questionable and it’s important to be aware that a negative result cannot rule out Lyme disease.

If the ELISA test is positive or equivocal, the blood sample is usually sent to the National Reference Laboratory at Porton Down in England or the NHS Highland National Lyme Borreliosis Testing Laboratory at Raigmore Hospital in Scotland. The Western blot (sometimes called an Immunoblot) is then performed. This test may still miss cases. You can request printouts of both of these tests and it’s advisable to do so for your own records.

There is evidence to suggest that Lyme disease does not behave like many other infections in terms of antibody responses and many doctors are not aware of this when interpreting results.

Current UK testing does not include all strains of Borrelia known to cause disease.

Some private laboratories argue that their testing is superior to the testing offered by the NHS but often, these tests have not been independently evaluated or validated in a way which would enable them to be accepted by NHS doctors. Patients are therefore caught between a rock and a hard place, not knowing which test results to believe. 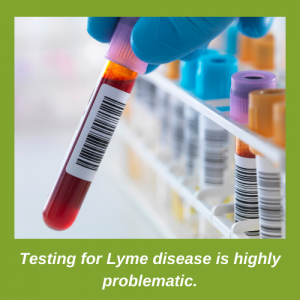 See the NICE Lyme disease guideline for more on their testing information.

If you have an EM rash, there is no need for testing and treatment should be started straight away. The initial testing method for Lyme disease offered by the NHS is an ELISA test which is usually performed at a local hospital laboratory and takes a few days or possibly a week to come back. The reliability of the two-tiered testing process used by the NHS appears to be questionable and it’s important to be aware that a negative result cannot rule out Lyme disease, especially as it can take up to 4-6 weeks after being infected for antibodies to show up in blood tests, if at all. There are some strains of Lyme disease not covered by current testing.

‘Laboratory tests for Lyme disease have significant limitations relating to the accuracy of the tests, the timing of tests, a lack of consistency in interpretation of test results and the expense and time associated with conducting tests’ (Brunton et al)

Many people in our Online Community report that they have been tested too early following a tick bite, meaning Lyme disease is dismissed as a possible diagnosis even before antibodies have had a chance to form. Immunosuppressed patients may never develop antibodies and neither may people who have had steroid treatment.

If the ELISA test is positive or equivocal, the blood sample is usually sent to the Rare and Imported Pathogens Laboratory (RIPL) at Porton Down in England or the NHS Highland National Lyme Borreliosis Testing Laboratory at Raigmore Hospital in Scotland. The next round of testing for Lyme disease is then carried out which involves a Western blot (sometimes called an Immunoblot) test.

Many doctors seem to be unaware that Lyme disease can behave differently to other conditions in terms of antibody responses. In many situations, an IgM response represents acute infection whereas IgG represents past infection but this is not necessarily the case with Lyme disease.

There is evidence that the IgM and IgG responses in Lyme are unusual and that, in particular, the responses may be slow and unpredictable, and that IgM antibodies may be produced throughout infection, even in late disease.

This paper states: 'Previous studies showed that the immune response to Borrelia burgdorferi appears to lack robust T-dependent B cell responses, as neither long-lived plasma cells nor memory B cells form for months after infection, and nonswitched IgM antibodies are produced continuously during this chronic disease.'

Instructions from the manufacturer of one of the test kits used by the NHS (the Viramed Borrelia Virastripe IgM test kit) state 'IgM antibodies usually appear 2-3 weeks after onset of the disease for the first time. Antibody titers often decline several weeks to months after convalescence. But they may also persist up to several years'.

You can request printouts of Lyme disease tests and it’s advisable to do so for your own records.

The NHS sometimes use a cerebrospinal fluid (CSF) test to look for antibodies. Samples are obtained by carrying out a lumbar puncture. An EIA is then used to confirm the presence of antibodies to Borrelia. It is possible for this test to produce a positive result for Lyme disease before blood tests turn positive but the evidence for the effectiveness of this test is poor and lumbar punctures come with their own risks.

In the UK, it is possible to pay for private Western Blot testing for Lyme disease using the same test kit as the NHS uses, without producing a positive ELISA result first. This may be useful if your GP cannot order a Western Blot directly for some reason. Both laboratories use the same testing facilities as the NHS located at RIPL, Porton Down and therefore the result should be accepted by NHS doctors.

Some overseas private laboratories offer a range of Lyme disease testing but these results are not generally accepted by NHS doctors.

N.B. As things currently stand, tests cannot prove the absence of Lyme disease or when the bacteria has been eradicated following treatment. It’s always best to seek the advice of a medical practitioner with experience of Lyme disease as history, symptoms and signs need to be taken into account. At the moment, there is an over-reliance on blood test results which do not always reveal the full picture.

Like with serological testing, tick testing is not 100% reliable either but if you do wish to save a tick you have removed from your, a loved one or a pet for testing (either dead or alive) make sure it is well sealed in a plastic bag. Pyramid offer this PCR tick test kit, which is also available on Amazon. This test may help to determine whether the tick is infected with Lyme disease (it does not test for co-infections). Pyramid has provided some further information on their testing here.

If you have further questions on testing for Lyme disease, connect with fellow patients by joining our Online Community on Facebook and post your queries there or email us at admin@lymediseaseuk.com, but please be aware that we are not medical professionals.