Many names, one disease…

You may have heard many different variations of the name ‘Lyme disease’, including Lymes disease, Lyme’s disease, Borreliosis and Lyme Borreliosis. We hope this post helps to clear up any confusion surrounding the correct name. 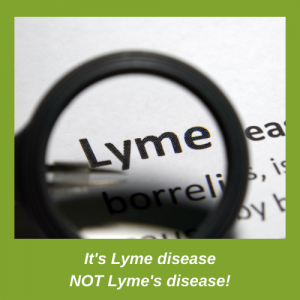 The infectious agent that causes Lyme disease is technically a bacteria called Borrelia burgdorferi. Borrelia is the name of the group of bacteria and burgdoferi is the particular strain, however the term ‘Lyme disease’ is also often used to describe the disease caused by other strains of Borrelia such as B. afzelii, B. garinii and many more. Borreliosis is the medical term for disease resulting from a Borrelia infection. In mainland Europe, the common name for Lyme disease is Lyme Borreliosis.

This is best explained with a quick history lesson! Lyme disease was first described in the 1970s in a town called Lyme in the state of Connecticut in the USA. Children in the area suddenly started to suffer from what appeared to be juvenile rheumatoid arthritis.  Doctors and researchers then referred to this disease as ‘Lyme disease’ after the town and despite the fact that the causal agent was then discovered to be the Borrelia bacteria, the name ‘Lyme disease’ stuck. Now arthritis is just one of the many symptoms associated with Lyme disease and in Europe it is often not even the main hallmark of the illness. It’s thought that this may be due to the differing strains of Borrelia found here.

‘Lyme’s disease’ would be correct if the disease was named after the person who discovered it -i.e. like Parkinson’s disease. However, it was actually Willy Burgdorfer who first discovered the bacterial cause of the disease and this is why one of of the strains of Lyme disease is called Borrelia burgdorferi.

You can read more about the early history of the disease on the Bay Area Lyme Foundation’s website here.

Lymes disease is also incorrect as the town in Connecticut is spelled without an ‘s’ on the end.