In the summer of 2017 whilst pregnant with Gabriella, I was, as we later found out, bitten by a tick. At the time I experienced ongoing flu-like symptoms and didn’t notice a bull’s-eye rash. When I saw one of the GPs at my surgery, I was told what I had was likely due to back-to-back viruses. It wasn’t the GPs fault; unfortunately, there is a significant lack of training around best practice for spotting and treating Lyme (I have since pointed my GPs in the direction of Lyme-related CPD and they have attended)! 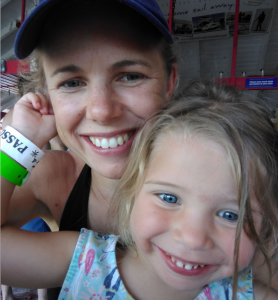 I recovered from the acute illness and in November I gave birth to Gabriella, who thankfully was healthy at the time.

In February 2018 I started to feel more anxious. I attributed this to seasonal affective disorder, which has been a challenge for me since moving to the UK as a teenager but it didn’t disappear with spring. In the months that followed I also became more fatigued; friends said “welcome to life with two kids!” My stamina was also not as it had been before. Previously, I had enjoyed running and bounced back quickly following the birth of my first daughter. In the Spring of 2018, I was training for a 10km race and finding it quite challenging. Two hours after the race (at the time I was disappointed with my time!) I came down with a terrible sore throat, swollen glands and immense fatigue. This turned out to be Glandular Fever. I didn’t realise I’d had it before but now know that Borrelia can reactivate the Epstein Barr Virus.

Following the acute illness, I suffered with ongoing fatigue and frequent sore throats, which I was told was post viral fatigue.

I returned to work in September but by November I could not read or process my emails and began struggling with memory loss and concentration difficulties. I took some time off work. In December I returned and carried on, pushing myself through, until June 2019, when I took an extended period of sick leave. I returned and worked until June 2020 before taking further time off and eventually leaving my post. In the September, I was diagnosed by the NHS as having chronic fatigue syndrome and recommended physiotherapy and psychotherapy. This didn’t sit right with me.

By October 2019, I was also experiencing crippling chest pains and in the months that followed numbness and pins and needles in my extremities as well as frequent low-grade fevers, muscle twitching throughout my body, joint pain and generalised muscle weakness set in. There were other symptoms but those were the main ones.

At the time I had a private nutritionist who was trying to help me with the ‘chronic fatigue’.

She became concerned that I wasn’t responding to the prescribed regime and indeed was experiencing these additional symptoms, spent a lot of time in bed and could not enjoy life with my family. She deduced that I probably had Lyme disease, so I did some testing. These came back positive for Borrelia Burgdorferi, Borrelia Garinii and Borrelia Afzelii (i.e. Lyme Disease), plus Bartonella Henselae, Mycoplasma Pneumoniae, Chlamydia Pneumoniae and EBV. I was also found to have high levels of mycotoxins (mould illness) and arsenic as well as very low levels of lithium.

I sought out a UK-based doctor who treated Lyme.

Over the two years, I have been treated with a variety of antibiotics and Disulfiram. I went from sleeping much of the day and unable to work, to working 25-hour week and undertaking a part-time distance learning MBA. I earned distinctions in three out of my first four modules!

In August 2021 I moved to an NY-based physician who offers telemedicine. In September 2021 I tested negative for all Borrelias and was considered to be in remission from Lyme, but unfortunately still positive for Bartonella Hensellae and Quintana plus EBV. In November and December, I travelled to St Luke’s Clinic in Gdansk for Supportive Oligonucleotide Therapy (SOT) to treat the Bartonella and EBV. I started to notice significant improvements to joint pain, stamina, muscle twitches, joint pain, sleep etc within a few weeks and started to run again managing 3km by mid-January.

I had a setback in late January due to contracting COVID.

I was positive for 17 days – and unfortunately, this appears to have re-activated the Lyme, it seems Disulfiram did not eradicate the bug for me. I’ve been experiencing more fatigue, clumsiness and memory difficulties. Nevertheless, I now walk a lot and have started returning to the gym, reaching 3km again just last week. In early April I had the required blood draw for SOT and expect to receive the treatment toward the end of the month. I am hopeful for dramatic improvements again this time!

As for my daughter, Gabriella…

For the first three years, Gabriella seemed okay, though she didn’t sleep brilliantly. Shortly after my diagnosis, we had her tested and indeed, she had the same infections (minus EBV). She also tested very high for mycotoxins.

Initially, we sought treatment from a paediatric specialist in Germany. In an awful twist of fate, she was actually bitten by a tick herself on this trip, and contracted Rickettsia. The Paediatrician would only treat with herbals, and over the next nine months, Gabriella went downhill with increased fatigue, weakness, irritability and night terrors. In March 2021, we moved her to the physician in New York State who offers telemedicine. She experienced some improvement (including much-improved sleep) over the following few months but nothing dramatic. Over the Summer, her doctor added an extra treatment. The night terrors stopped and in September she ran the 1km Regency Fun Run (running most of the way)! We were thrilled. She commenced another treatment in October for the Lyme. She continued suffering from fatigue and irritability, but these disappeared once she stopped a particular medicine in November, and she can now regularly complete 1km of our weekly Junior Park Run.

At the time of writing, on receipt of her lab results, she is still testing positive for Bartonella and we are moving forward with an age/weight appropriate SOT protocol for her. Side-by-side SOT mother and daughter treatments (and hopefully full recovery) await!