Dr Ben Brennan and Professor Roman Biek offered an insight into tick-borne pathogen research taking place at the MRC-University of Glasgow Centre for Virus Research and the Institute of Biodiversity Animal Health and Comparative Medicine.

Watch the recording and download each set of slides below.

Remember, if you/someone you know/your child/pet are bitten by a tick, you can report your tick sighting to TCV.

Dr Brennan and Professor Biek have kindly provided answers below to the questions that were submitted in the webinar chatbox:

1) You compare Uist with Barra and Harris.  Even though they all have large tick numbers (so that livestock as well as deer are contributing to the spread of ticks), why is Uist (with livestock AND deer) showing so much higher rates of lyme disease?

This is a very good question that we don’t know the answer to yet.  Consistent with the difference in Lyme disease incidence, we also see a much higher proportion of ticks being infected on these islands  (see Q7 below). Given that neither livestock nor deer are competent to transmit the pathogen, this points to differences in the transmission host communities, in particular the abundance and distribution of small mammal species that are competent to transmit the pathogen across islands. We are actively investigating this at the moment.

2) Why do some people not get bitten by ticks and others do?

The most likely answer to this question is that those getting bitten are at the front of the “pack”. Ticks are what are called generalists, which means they are not that bothered about what they feed on. They “hunt” for hosts by climbing up high and sticking their front legs out in what is called “questing” behaviour – and they just grab onto what ever walks past. There is one study that was done in the Czech Republic on blood type preferences, however this was done in a petri dish and isn’t really transferrable to real life.

3) Can a virus be transmitted by a tick to a human even if it doesn’t bite? For instance, if I find one crawling on either myself or my dog, and I pick it off with my fingers? Or if I’ve squashed it with fingers to prevent it biting?

Yes they can but only if you disturb the body of the tick, for example by popping it. This will release whatever they are carrying into the environment and then you can pick this up by for example touching it and then putting your fingers in your mouth/eyes etc. It’s very important that you just wrap and flush, and not disturb the body as hard as it can be to refrain!

4) Here in Uist deer are habituated to the human environment – they are not frightened by us, by dogs, cars etc and can be found almost all year near houses. Would this contribute to Lyme numbers in humans and has this been studied?

Clarifying how deer numbers and distribution contribute to the high incidence of Lyme disease cases is one of the objectives of our research. As explained in the talk, deer are not competent to transmit the pathogen and we have found high tick densities even on islands where deer are absent. So deer might be part of  problem but they are unlikely to be solely responsible for the high incidence of Lyme disease cases.

5) What are the host-seeking mechanisms for ticks?

Ticks in the UK carry out a behaviour called “questing” – this is where they climb up to the top of some grass for example and stick their two front legs out which have sticky hairs. As something walks past, they grab on with those legs. 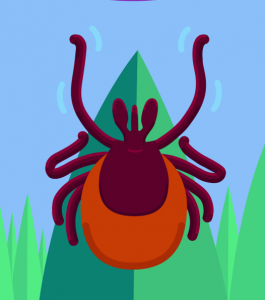 6) How much does the reduction of sheep dipping contribute to rising tick numbers? Dipping was stopped because it was thought that dipping was causing illness in farmers. What is the likelihood that it was actually unidentified tick-borne infections that were the cause of illness and stopping dipping has made the problem worse?

This is an interesting point and again something we are investigating at the moment by surveying crofters about tick treatment practices on their livestock. The potential health hazards associated with dipping are well established but it is conceivable that changing dipping practices could have affected tick numbers.

7) You told is tick exist in S Harris, Uists and Barra -so have you studied tick numbers carrying Lyme in these separate areas?

Yes, we found that on the islands with high human incidence (N Uist, Benbecula, S Uist), 6.4% of questing ticks (nymph stage) were infected, compared to 0.7% on Barra and S Harris (see Millins et al. 2021 for more details – https://doi.org/10.3201/eid2702.203862). Given that almost all infected ticks on high incidence islands carry a form of the pathogen that is associated with small mammals, we are investigating how the different species present on these islands (e.g. rats, field voles, shrews) are contributing to transmission.

Sheep and deer are not considered transmission hosts because they don’t become systemically infected with the pathogen. Co-feeding, whereby an infected tick passes the pathogen to another tick feeding nearby on the same host, has been documented in sheep before and might occur in deer as well. However, this is thought to be relatively rare and the extent to which this could contribute to high proportions of ticks being infected is currently unknown.

Proximity of reproductive hosts near people and their homes is likely to be an important risk factor for encountering infected ticks. Even if they are not competent to transmit the pathogen, these hosts provide the tick vectors that are necessary for the pathogen to be passed from one transmission host to another but also to incidental hosts like humans. We found that almost 3/4 of all tick bites on the Uists happen within 1 km of people’s homes, including their gardens and that the density of infected nymphs in gardens is comparable to that seen in other habitats (see Millins et al. 2021 – https://doi.org/10.3201/eid2702.203862).

9) Which test to you use to determine a tick is infected?

We use polymerase chain reaction (PCR), a standard molecular technique, to determine infection in the tick. In addition, we analyse the genetic sequence of the PCR product to determine what type of Borrelia (i.e. genospecies) was causing the infection.

10) I read that a vaccine for Lyme disease was being developed. Do you know what is happening with that?

There has been talk about a Lyme disease vaccine for a long time and multiple groups are working on this but we are not aware of any becoming available in the near future.

11) Are there any plans to monitor Babesia in ticks given that it’s a human pathogen?  I note you don’t mention Babesia yet Babesia venatorum is present in the United Kingdom (Gray et al., 2019) and significantly has probably been here for some time given the wide distribution (Weir, Gray and Shiels, 2020)  and is known to infect humans.  We have no tests in the UK for the EU species of Babesia.

We are not aware of any plans to monitor for Babesia infection systematically but we aware that it has been shown to be present in UK sheep and that it is another tick-borne infection to keep an eye on.