We’ve had a good year for fundraising and are so grateful to all those that commit their time and resources towards helping Lyme Disease UK achieve our goals.

Did you know you can fundraise for us through Facebook?

This year we’ve had three birthday fundraisers totalling a wonderful £812. Thank you to Ben Sales and Jane Austin, along with LDUK’s Co-Founder and Chair, Natasha.

Geocaching in Memory of Jas Matthews

A huge, heartfelt thanks to Jim Salter who completed a 30-day geocaching challenge in memory of his late wife, Jas Matthews. Jas was a much-loved member of our Online Community who very sadly passed away from Lyme disease in 2017.

Jim shared that Jas was bitten by a tick back in 1994 while they were on holiday in Mallorca. Her diagnosis and treatment were delayed… “Jas became sicker and sicker and before long was diagnosed with ME. She had to leave her job and start her own business so that she could be flexible with her hours to suit the many highs and lows she began to experience with her health.

“After exploring and researching, she felt her diagnosis wasn’t quite right and sought additional advice and tests, to find out she had in fact got Lyme disease. It was 2008 at that point and she had become increasingly weak and ill. Many doctors and hospital visits later (with little help or respect for the disease from outsiders) Jas sadly passed away in the spring of 2017.

“To mark this occasion and our continuous loss, I set out to complete the fun and quirky geocache characters and more throughout East Anglia. I’d hoped to find at least 600 in 30 days, by day three I had found 200 of them and walked 42 miles!”

This was such a fun way to fundraise and we are so inspired by Jim’s passion and determination, by the end of his challenge he had found an incredible 1003 caches and walked more than 250 miles! Jim’s challenge raised more than £400 and he then went on to take part in our WOW Challenge…

This year we launched our first big fundraiser, the WOW Challenge. This event invites participants to walk 20km or wheel their way to 100km whilst raising funds for LDUK.

Jim completed his WOW with an extensive bike ride, cycling 651km across East Anglia and Devon’s Back Down Hills.

Other participants so far, include:

Altogether, they’ve raised more than £2,200 and we’re thrilled to have had such great support. The WOW Challenge is still open and we’d LOVE for you to join us, find out everything you need to know about it at www.lymediseaseuk.com/wow.

Congratulations to Rothley Park Golf Club who set a new World Record by completing 18 holes in the fastest time! The challenge was held as a fundraiser and the team raised an impressive £2600 for the club’s chosen charities, The Meniere’s Society and Lyme Disease UK.

Ladies Captain, Jenny Piecha, told us, “Rothley Park Golf Club broke the current Guinness World Record held by Farnham Golf Club of 13 minutes 42 seconds by just over a minute coming in with a time of 12 minutes 40 seconds. 166 players, witnesses, monitors and cameramen took to the fairways to come together with one sole endeavour to beat this record.  The atmosphere was electric and the resulting celebrations euphoric.  It was an amazing achievement and we were very pleased to be able to raise over £2,000.”

Congratulations to Nick Clarke who completed his Half Iron Man in 9 hours and 5 minutes, raising £700 for Lyme Disease UK!

“The day was a wonderful experience and I was proud of myself and my niece Beth for completing it. Once all the nerves were out of our systems and the event had started, we were able to get in the zone and the event was thoroughly enjoyable. We both really enjoyed the swim and the bike ride and all our training had helped a great deal. The run was very hard though and we both struggled, but we kept thinking of the people who struggle with Lyme and that kept us going to the finish line. We hope that the £700 we raised will help a little towards supporting those with Lyme disease.”

Nick took part in support of his wife, Sophie, who lives with Lyme disease. You can read more about this lovely couple and Nick’s fundraising in this blog.

We were excited to have a team in the Great North Run this year and couldn’t be happier with their impressive fundraising total of more than £2,707! Our runners, Tom and Jim Squires, Jeff and Louis McCarthy, and Gareth Hill all said it was an amazing experience and worth the wait after last year’s run was cancelled.

Jeff is a former Lyme disease patient and he ran the half marathon with his son Louis. “What an experience that was to run GNR for Lyme Disease UK! To do it with my son in his university city (well for the first 150 metres anyway!) made it even more special. Injury, then extreme stress had really disrupted my training and wellbeing so it was life-affirming to be part of such a positive event, team and fundraiser like this. Seeing each other a few times due to the changed out and back course more than compensated for the extra climbs! Fundraising so much and Louis smashing his target by nearly 5 minutes, really capped off a fantastic weekend.” 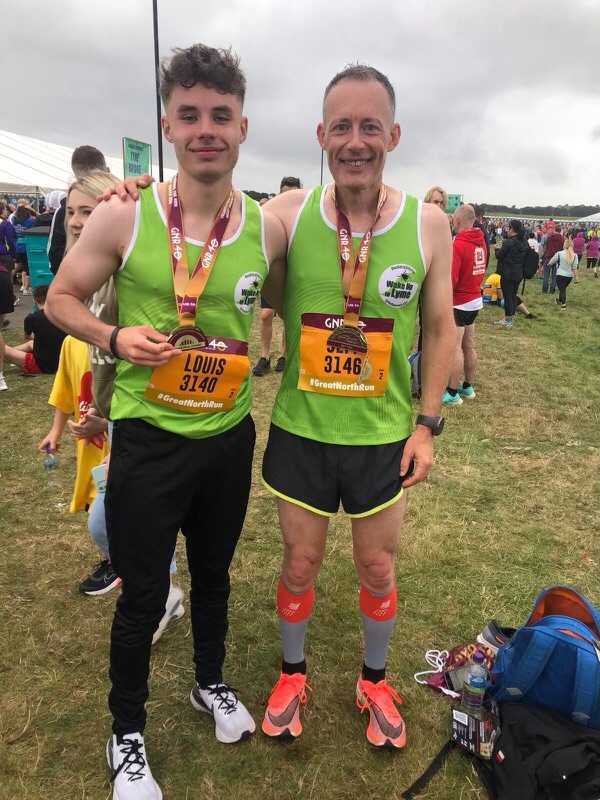 Tom also has personal experience of Lyme disease, and his brother ran alongside him. Gareth chose to take part in support of his wife who was bitten by a tick in Richmond Park and contracted Lyme disease. To read more about our runners, check out our Great North Run Team blog.