I have been going to the doctors for two years now with various symptoms.

Brain fog, dizziness, light-headedness, and, as charmingly scrawled on my notes time and time again, TATT (tired all the time). 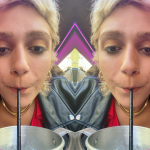 I’d had health problems previously, but they’d subsided as soon as my tonsils were removed in 2017, so I knew something was wrong. The infections were always treated when I visited the GP, but they never looked to find a deeper cause.

I was studying to become a solicitor and became so overwhelmed and confused. Some days I cried because I couldn’t think or communicate basic things and was exhausted after a full night of rest. Every morning I woke feeling like I’d been to a rager the night before!

A week after my antibiotic course was complete for the ear infection, I remained dizzy, exhausted, and unable to communicate. My doctor said to wait another week before booking a follow-up appointment, as “these things can take time”. When I attempted to book my follow-up appointment, still not feeling better, the online booking system advised me that no appointments were available.

I went to NHS 111 online to enter my symptoms, but was told I should call 111, as they were unable to clarify my situation through the website. Upon calling 111, an automated voice told me no operators were available.

At this point, I was failing to study, to show up to various volunteer roles, or to engage in anything I used to enjoy.

I cancelled on friends before every date (during the sporadic easings of lockdown). I was tired and afraid, and felt like I was letting everyone down.

Desperate to find help upon realising I was experiencing memory issues, I bought a few blood tests online. The first one was a CRP test (C-reactive protein – a helpful indicator of inflammation) which showed slightly elevated results. My GP wasn’t concerned.

I was reminded that fatigue (my main symptom) was commonly a result of depression, which I have had for years. That I was probably just recovering from the ear infection still, and that everything should be fine. I felt this was untrue. I went back online and bought a test for every condition that listed fatigue as a symptom.

Upon buying a Lyme disease test, I laughed with my housemates about being a hypochondriac.

When the results came back positive, I quickly transferred GP surgeries to an online service for same-day appointments. I was seen, but immediately questioned (and spoken down to) about where I had bought the test. I was bewildered, could you buy Lyme disease tests on the corner in Peckham? It was a legitimate test!

Despite their scepticism, they booked me in for the second (immuno-blot) confirmatory test.

I finally had an answer: it was Lyme disease making me ill.

The doctor told me that when resolving this and preventing long-term side effects commonly caused by the disease, time was of the essence. She prescribed me antibiotics and told me to go to the A&E if I experienced any dizziness, tingling, or problems with my heart. It took two weeks for the pharmacy to deliver my prescription.

Following one month of antibiotics, I was still sick. I wanted to see my NHS GP but getting an appointment wasn’t easy, so I booked in with a private GP. They prescribed amoxicillin for 28 more days following NICE guidelines (which state another course should be prescribed if the patient is still experiencing symptoms).

Along with the prescription, I was also referred to an infectious disease specialist.

Sadly, the specialist did not read my referral letter, was adamant I didn’t have Lyme but rather post-viral fatigue symptom or long covid! I had a positive Lyme disease test from the NHS and had clarified that my symptoms started before I’d had covid… They also made comments about “quack doctors” prescribing second doses of antibiotics and about patients who receive tests from Germany and “claim” they have Lyme disease. This NHS specialist then claimed that most people who think they have Lyme disease actually have chronic fatigue, and suggested vitamins and cognitive behavioural therapy!

I did some further research and contacted another specialist, who was far more educated about the complications of Lyme. I’m now booked in for an MRI scan and at the time of writing, have eight days left of my second antibiotics course. I am feeling a lot better.

Though there are still days when I can’t leave my bed or function normally, on a good day I have been able to walk 10,000 steps (having averaged about 1000-2000 since my symptoms began). I’ve now deferred university for a year as the doctor advised I will likely be feeling ill for some time, a few months to a year. It’s impossible to give a definite answer, but I am hopeful that I am getting better, surely but slowly.