It was May 2013 when I first knew something was wrong. 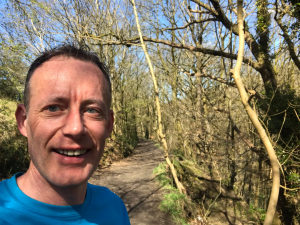 I had failed to complete a 5k race which had never happened to me before. I had to stop at the 3k mark as I just didn’t feel right and it wasn’t the normal type of fatigue you might feel during a race.

During the social gathering afterwards, I was a few seconds behind the conversation and then I almost fainted! I stepped outside to get a bit of fresh air and went home. A few weeks after that I crashed. I lost 6.5k in three weeks. I was bed-ridden for ten days and slept almost non-stop for the first three. I wasn’t able to think with any clarity whatsoever.

There were so many physical and neurological symptoms it was difficult to fathom what was happening to me. It was a scary time for my family too.

I experienced a real dichotomy with the medical profession. On the one hand I had an amazingly supportive GP who was open-minded enough to work with me to find out what was wrong. I’d experienced a pattern of periodic illness for about 18 months prior to my crash, so with this in mind, and the fact that all the testing had ruled out other potential illnesses, my GP began treating me for Lyme disease.

On the other hand, I was on the receiving end of a very dismissive infectious disease specialist and his registrar who refused to accept Lyme disease was the problem. I was told it wasn’t possible to catch Lyme disease in the UK! This is just not true, Lyme disease is present all over the country.

Thankfully, my GP continued to treat me. This helped for a short while, then I’d plateau, before declining again.

During 2015 I made a gradual return to running.

I can’t begin to describe the feeling of pure joy at being able to jog/walk 500 meters and to progress to 1000 over a period of ten days. To simply feel a bit of rain and wind on my face while moving more actively was something I can’t put into words. To this day I never take such joy of movement for granted.

I wanted this wellness to last but was still living with symptoms of Lyme disease and searching for answers to a more permanent solution. This led me to a specialist in Brussels. In July 2015 I was put on a complex treatment plan for a 12-month period that aimed to eradicated serious co-infections like Babesia (a malaria-like disease that in my case was quite severe) and over a period of about five years, I was able to nullify other co-infections and minimise the impact of the Lyme disease itself.

I was told by the specialist that it was unlikely I’d ever be completely free of Lyme.

Mainly because it had been in my system for 18 months prior to starting treatment. Why wasn’t I treated quickly? Because I didn’t get the ‘classic’ bulls-eye rash and I hadn’t seen a tick on me. But the fact is, not every patient with Lyme disease will get a rash, and if a rash does occur, it might not be seen. As for the tick, they can be as small as a poppy seed and are easily missed.

I will always be at risk of Lyme flare-ups now. This has happened several times in the past few years since stopping antibiotic treatment, mainly through periods of intensive work.

What really helped was learning about my ‘red line’ was. To operate beneath that red line at all times, mainly when associated with work and exercise. Consistently operating under the red line, would mean the level of the red line would very gradually rise. This approach is like graded exercise therapy and has worked incredibly well for me.

Other things I do to help include:

My ability to walk and run has improved so much that I’m the fittest I’ve been in over eight years! I have a different perspective on life now.

I’m very lucky that I can walk, run and cycle. It’s certainly not the case for most other people living with Lyme disease and other long-term conditions.

Finally, I’m very grateful indeed to the work Lyme Disease UK in raising awareness and supporting people. I really hope sharing these extracts of my story will help people in some way.