In 2010 Andrew had secured a two-book deal and just published his first novel, A Portrait of the Arsonist as a Young Man; David Bowie had allowed him to use his lyrics in the narrative. He’d won international short story prizes and an award for his work supporting new writers in Kent. He taught creative writing at two universities and was hosting sell-out ‘in conversations’ with internationally acclaimed authors like Kazuo Ishiguro. After years working to achieve this, he was on a roll. But everything was about to change… 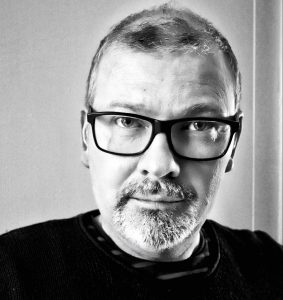 In May 2010 Andrew was bitten by a tick. For the next year he was troubled by a range of intermittent symptoms including stiff neck, sweats, dizziness, fatigue, and pain.

Then, in August 2011 he was struck down by a catastrophic event with devastating effect. He was diagnosed with a stroke, then other life-threatening conditions. But after several months, perplexed doctors agreed he had none of these illnesses. Tests for many diseases from Lupus to Sarcoidosis all returned negative. Yet Andrew’s health continued to decline. It was a mystery. Debilitated, he could no longer teach. He couldn’t even read for more than a few minutes, let alone write. He was unable to walk unaided.

​Needing answers, his wife helped him to research his symptoms. Everything tracked back to the bite and the strange bull’s-eye rash. The clinical signs were clear to them – he was suffering from Lyme disease. He was convinced that untreated, it had crossed the blood brain barrier and wreaked havoc in his central nervous system. His NHS test results were a mixture of positive and negative, but didn’t make it over the bar. Tests in the USA and Europe were positive, but didn’t count here in the UK.

Desperate, Andrew fought for his life for two years. His eventual treatment with antibiotics by a supportive doctor saved him, though he still suffers neuropathic pain and other symptoms – a legacy of the damage done.

Since his partial recovery, Andrew spent four years writing Anatomised, a novel that draws on his experience. Jack Mann (one of the central characters) is a comedian, so although the book is darkly humorous it never shirks from its unflinching look at Lyme disease, the controversy surrounding it and its impact on physical and mental health.  ​