Phage testing is a type of PCR testing which involves analysing DNA fragments known as phages which Borrelia (the bacteria which causes Lyme disease) disperses throughout the body. A patient’s phage level could help to determine whether some is suffering from an acute or late-stage Lyme disease infection.

Dr Louis Teulières is a medical doctor, who received his degree at the University of Nice in France. He completed specialisations in immunology, haematology, immunopathology, bacteriology and epidemiology at the Pasteur Institute in Paris and at the CDC in Atlanta. Immunology and infectious diseases have always been of interest to him. Working for the Red Cross, as well as research and organizing epidemiological surveys at the Pasteur Institute, gave him a wide spectrum of experience in immune and infectious diseases such as HIV.

Dr Teulières is an active member of the immunology department and the research team who received the Nobel Prize 2008 for discovering the HIV virus in 1983.

In clinical practice, he focuses on treating immune and infectious diseases such as Lyme disease and other tick-borne infections as well as neuro-degenerative conditions. Currently, Dr Teulières runs his clinic CMIL in Lisbon and Paris and has co-founded the Charity PHELIX, dedicated to the research and development of phage based diagnostics and treatments. He has also partnered with world-class healthcare professionals and university researchers such as the University of Leicester and St Thomas Hospital in London.

Disclaimer: These talks are for informational purposes only. LDUK does not endorse any clinic, laboratory or practitioner.

Tick bite prevention and correct removal are crucial when it comes to avoiding Lyme disease. There are a few simple steps you can take to reduce your chances of being bitten by a tick. Click the image below to learn more. 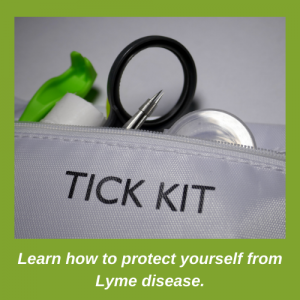