Back in September 2020, I noticed a rash on my leg. I felt groggy all day, tired and achy, and when I woke up the following morning, it was as though an elephant had sat on my neck all night. It ached relentlessly. 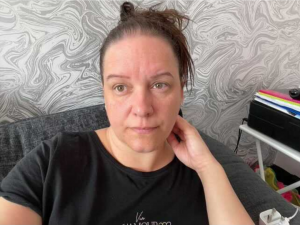 I had absolutely no idea about Lyme disease, and didn’t recognised the rash at the time, but I now know it was the EM rash.

I wear shorts outdoors all the time and walk my dog in Bristol and Wales. Looking back, I remember noticing a tick on my dog, but not on me, they’re so small though and very easy to miss. Eight months later, I was waking up every day feeling like I had the biggest hangover in the world, but I hadn’t touched a drop of alcohol.

There were so many symptoms.

My neck felt like someone had sat on the back of it. It crunched when I moved it, as though it was grinding. Driving became painful and the pain took my breath away. I suffered insomnia and would lie awake for hours. I got pin-prick feelings across my head and felt tired so easily. I also worried because I was forgetting things.

I contacted my GP and emailed the photo of my rash. She suspected Lyme disease and prescribed a course of antibiotics. I took them but felt much worse, with unbearable head pain. After a month of treatment, there was no improvement. (Take a look at LDUK’s tips on taking doxycycline).

I read a lot online about Lyme disease – including the NICE guideline – and came to the conclusion that a second course of antibiotics would be needed.

I had to see three GPs and I made a complaint to my surgery practice manager before I was prescribed a second course (despite it being recommended in the NICE guideline) and I felt they were annoyed that I was insisting on more treatment.

GPs have minimal training on Lyme disease, so it’s not uncommon for Lyme patients to come up against these difficulties. (Be sure to recommend the RCGP Lyme disease toolkit to your GP).

I completed a second four-week course of doxycycline and amoxycillin, but I still felt just as ill as I had on day one.

My GP practice have become agitated by my persistence. Calls with them can often be upsetting and frustrating. One of the GPs has dismissed my plans to get help privately with a Lyme literate doctor and said that perusing longer treatment is “nonsense”.

I am, however, thankful to the NHS for arranging MRI scans. Hopefully it will offer me a little reassurance and rule out other issues. During the past 8 months, I have had a number of calls with the NHS Infectious Diseases team at Bristol hospital. They think that the Lyme should have responded well to doxycycline and want to rule out other causes of my symptoms.

Along with the MRI scans, I may also have a lumbar puncture and have been prescribed amitriptyline. Whilst the NHS are exploring possibilities (for which I am very grateful).

I have consulted with a private Lyme literate doctor and am now following a herbal protocol.

I’m also awaiting further blood tests to detect whether I may have co-infections from the tick bite.

It’s frightening and some days I feel even worse than usual. This disease is expensive, it has caused me immense upset and feelings of despair, and my husband has had to take the strain. I’m told it’s a marathon, and it will take at least a year to start to recover.