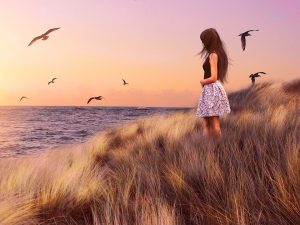 Today is International Women’s Day; a global day to celebrate the social, economic, cultural and political achievements of women. On this special day, Lyme Disease UK would like to recognise the female members of our online community, who make up a staggering 78% of our numbers! This high percentage is reflective of the fact that women come together to support and encourage each other during times of struggle. We stand together as one.

We’re celebrating International Women’s Day 2020 by publishing their stories of strength and survival whilst battling Lyme disease; the particular issues they were forced to face because of their gender.

Two women give us honest and raw accounts of their lives as female Lyme sufferers and explain what it means to them to be a woman.

“Lyme disease has shaped my whole life. So would I be the woman I am today without it? No, I would not.

It has left me always feeling different. As a teen I was bed bound, spoon-fed and never even considered my future and my role as a woman. In better years, I could almost appear “normal”. I could date, I could have boyfriends and I could micromanage my condition with one foot in the well world and one foot in the chronically ill world. I got pregnant at 25 during a better spell, before I had knew I had Lyme disease. I did all I could to protect myself and my baby from the harm of my chronic illness. My pregnancy was so traumatic with Hyperemesis Gravidarum, and everyone else doubted whether I’d ever cope.

I had my son and we both thrived for a while. I felt I’d found my purpose and my identity – I was meant to be a mum. My health even improved. But as the years went on, my health declined and my role as a mum, and now a
single mum, became harder and harder. I began to feel isolated and felt no one understood my role. I couldn’t do as other mums did; my micromanaging of my symptoms was no longer working. I was progressively becoming more and more ill, and I was missing out. I became reliant on my own mum to take over my mum duties, to enable me to survive.

Despite my health worsening and having the responsibility of being a single parent, I tried to continue relationships just to feel normal and to feel like a woman. But I also discovered that being chronically ill comes with red flags in relationships. At one end of the spectrum, you’re told “If you only you could drive” or “I hardly
ever see you”, but at the opposite end, you get “I’ll make you well with my love” and “Let me look after you and you’ll be well in no time”. None of these are healthy and I feel like I’ve never been able to be my own identity of me, without an illness.

I have lost so much and yet people say I’m lucky to have a child. But with that comes the grief of not being able to fully participate in being a mum. Doing it alone, the grief of not having more children and feeling like Lyme disease has stolen this from me. A family, a partner, a marriage and all of the things that partners expect of you like cooking, holidays, days out, keeping a home , even the ability to walk a short distance – just can’t be achieved.

As a single and independent woman, I know that being chronically ill is why I am alone. But I also know that the identity you find as an ill person, especially after 25 years, is just as important. We are still us; still women, still strong, still beautiful, and hopefully, as a doctor once told me, one day I will thrive – and not just survive.”

“I live in northern Switzerland in a high risk area for Lyme disease. One day, I went out for a walk with my family in the woods near our house. That night, when my husband was getting ready for bed, he noticed a tiny black tick that had bitten him near his knee. I removed it with tweezers and we checked our 2 year old and 8 month old children the next day. No one, not even me, thought to check me.

A week later, I noticed a lump on the back of my leg, but that’s not uncommon in mosquito season. A week after that, I started to feel like I had the flu and the lump had become rather red with a rash around it. I went to my doctor and told them about the rash and feeling unwell. She said that I probably had stomach flu (despite not having either vomiting or diarrhoea).

Four days after that, I started to feel very unwell indeed. I managed to get an emergency appointment with a completely different doctor. My husband came home to look after the children, but thought it would be too much hassle to drive me to the doctors, as he had his hands full with the kids.  So I drove myself, sporting a high fever and I actually bumped the car on a rock driving back. I really should not have been driving.

The second doctor asked me what the first doctor said, then said it’s probably that, and deemed my rash “unimpressive”. Again, I live in a high risk area. You’d have thought they might have been more aware.

Four days later, I made an appointment with yet another doctor. He took one look at the rash, by which time was as big as an open hand, and immediately said it’s probably Lyme disease. “Take these antibiotics for 20 days. And by the way, you’ll have to immediately stop breastfeeding your 8 month old daughter because of the antibiotics.” And that was it.

Being a woman, being a mother, I found doctors to be dismissive of my symptoms (the first doctor first asked me if I was under any particular stress, and suggested that sometimes that can make you feel unwell). The delay in diagnosis meant I’d had it for over 3 weeks before the antibiotics were prescribed. My husband did not recognise how ill I was (as the doctors had said I should be fine in a day or two each time) and I still had to look after our children full time despite feeling unable to stand very well on some days. If my husband had been the one to catch Lyme, he would have been able to stay at home and rest in bed. But a stay at home mother of young children never gets that opportunity, unless actually hospitalised.

The fact that I had to immediately stop breastfeeding didn’t even register as an issue with the doctor. I later asked him to do some research – were there any alternatives that might enable me to keep feeding my daughter?  In the end he said yes, but it was still a risk and it would be on my shoulders.

The antibiotics stopped my appetite completely for two months and I lost 10kg. Over the course of the past year, all of that has come back with more, despite not changing my diet and never changing weight more than a kg or two for the previous 20 years, and struggling to put on weight during pregnancy.

I have odd periods where some weeks or even months I am so tired that I really struggle to get through the day, and I have no way of knowing whether or not it is to do with the Lyme disease.

I’ve had blood tests at my behest, have been referred to a gynaecologist, gastroenterologist and for psychotherapy because I’m told I shouldn’t be as tired as I am. It’s difficult to describe the type of full-body fatigue that can occur, but I’m told with absolute certainty that because I took the antibiotics there’s no way it can be connected with Lyme disease. I guess I’ll never know, but I do have to live with it.”

If you’ve been affected by any of the issues in this article, you can find support via our Online Community Group on Facebook or you can call the Samaritans for free on 116123.