Singer Justin Bieber has created a fresh wave of Lyme disease awareness this month by revealing his struggle with Lyme disease, which was mistaken for mental health problems and even drug abuse.

On his social media channels, the singer said “I’ve been recently diagnosed with Lyme disease, not only that but had a serious case of chronic mono which affected my skin, brain function, energy, and overall health…it’s been a rough couple years but getting the right treatment that will help treat this so far incurable disease and I will be back and better than ever”

Justin’s message serves as a reminder that Lyme disease does not discriminate and that the diagnosis and treatment of the illness, particularly when it goes undetected, can be complex and time consuming.

Justin’s wife Hailey summed up the situation very well with her tweet which asked people not to downplay the severity of this complicated illness: 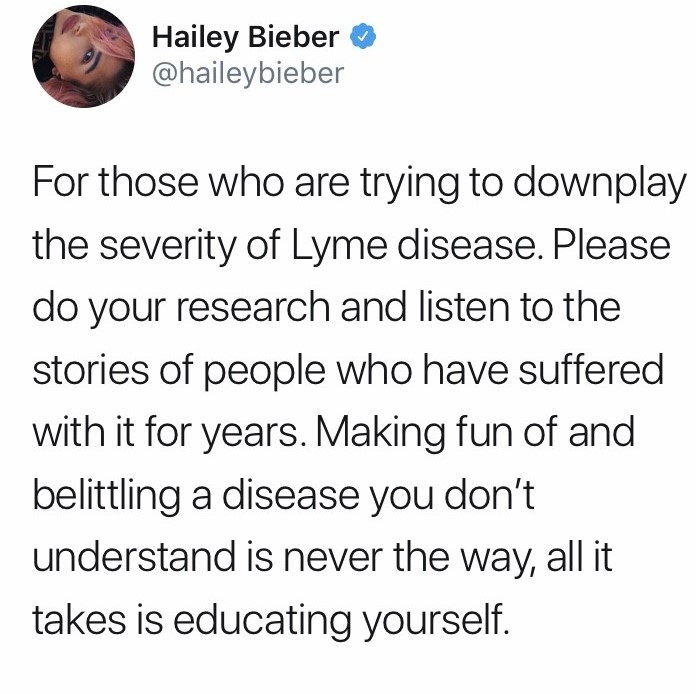 As always when a celebrity speaks out, there has been a huge increase in media coverage and LDUK’s Press Manger, Julia Knight, has been inundated with interview requests following the news.

We’d like to take this opportunity to wish Justin Bieber a speedy recovery, to thank him for speaking out on this incredibly important issue, using his platform to raise awareness. We would also like to thank all the members of our Community who, without much notice, took part in interviews across the country.

Do check out our information on symptoms, diagnosis and prevention to learn more about the illness and how to prevent it.

Here is a sample of the media coverage: