May 2019 saw the nation ‘Wake Up to Lyme’ with our most successful awareness campaign yet. Thank you so much to everyone who took part! LDUK sent out more posters and leaflets in the first week of awareness month than we did during the whole campaign last year! A whopping 20,000 leaflets and tick awareness cards and 10,000 posters were distributed. Word is getting out there!

Major buildings, bridges and other important landmarks across the UK took part in #LightupforLyme and were lit up in green to mark Lyme Disease Awareness Month. LDUK’s Chair, Natasha Metcalf, attended the Weymouth Pavilion light up and team members Sophie Ward and Morven-May MacCallum organised some gatherings at the Blackpool Tower and the Ness Bridge light ups, which doubled up as social gatherings for local members of the LDUK Online Community! Thanks to all the buildings and landmarks that got behind our cause and to all the community members who helped us to organise the light ups as well as the beautiful photos which were sent in! 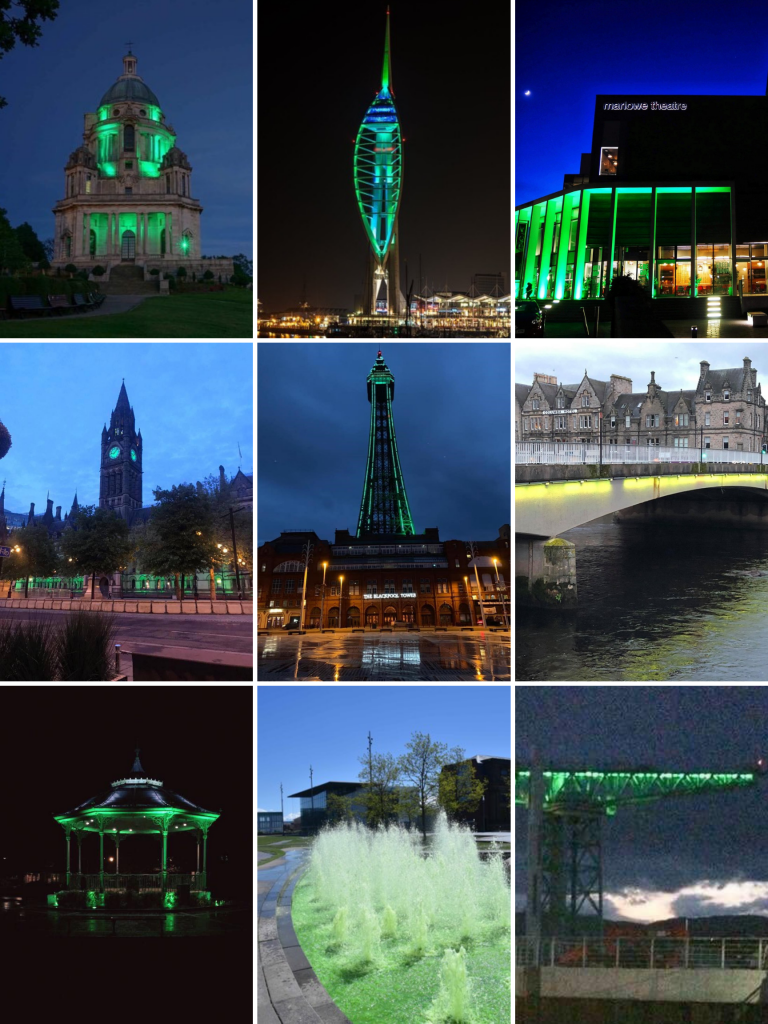 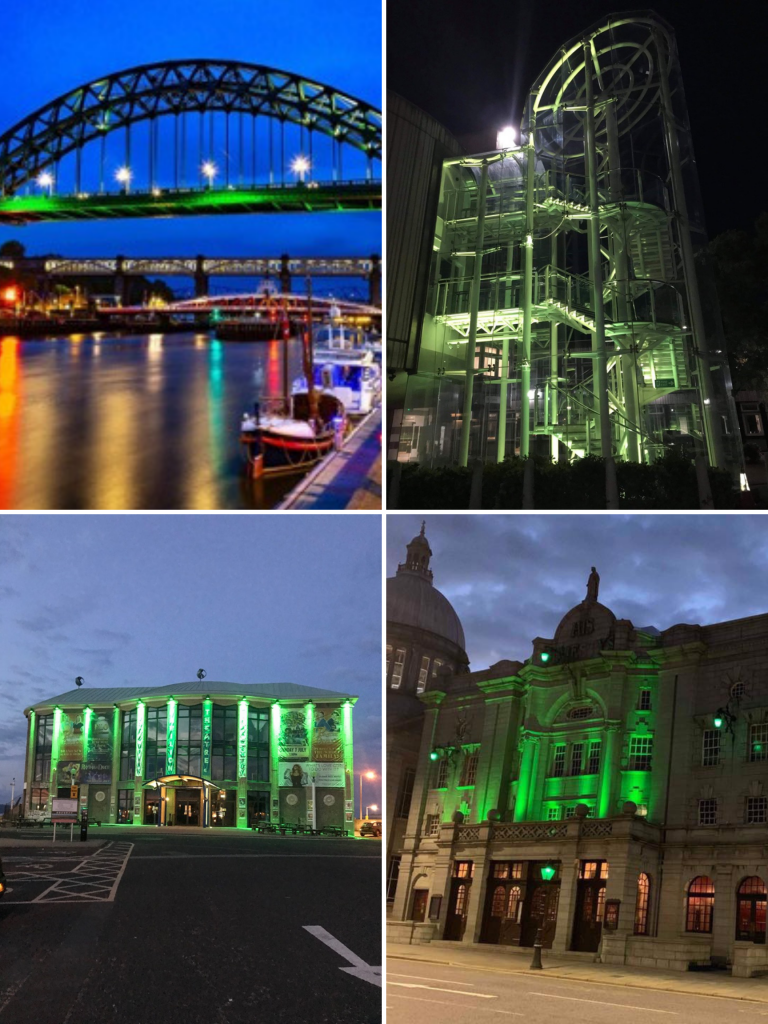 Other members of the LDUK Community bravely shared their stories in the media during the month including Susan Small who was interviewed by Med Tech Europe in order to explain how she caught Lyme disease and the symptoms that soon followed. Our Press Manager, Julia Knight, featured in numerous interviews throughout the month of May, including this interview on Radio Lincolnshire.

A BBC documentary, Disclosure: Under the Skin also aired, featuring many members of the LDUK Online Community.

LDUK’s Sophie Ward hosted lots of members of the Community on her podcast Chronic But Iconic during the month of May to raise awareness, including LDUK’s Natasha Metcalf, Morven-May MacCallum and Julia Knight. You can find an episode list and listen to Sophie’s podcast here.

“The story behind the creation of my podcast channel was that I wanted the channel to be a place where people could enjoy inspirational stories and content at ease. We can’t always write, read or watch but listening to content takes so much pressure off. I am always learning, always trying to make my content more motivational, helpful and better all round.” – Sophie Ward 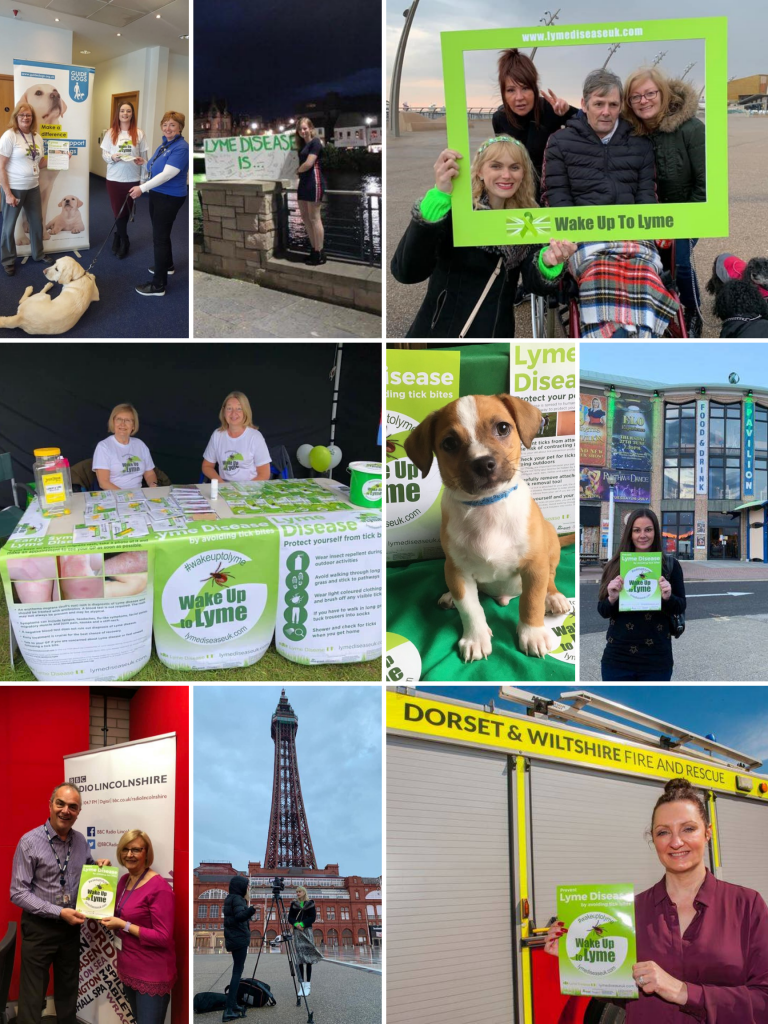 LDUK wrote to all MPs on 30th April to urge them to share awareness information with their communities, public health education and health and well-being boards. We also asked them to write to the Secretary of State for Health and Social Care, Matt Hancock, to lobby for research into Lyme disease along with the immediate training of GPs and the set up of combined research/treatment centres. Thank you to MPs Darren Jones,  John Grogan, Nic Dakin, Michael Tomlinson and Jackie Doyle-Price for posting about Lyme disease and tick bite prevention tips this month.

LDUK emailed 10,000 primary and secondary schools across the UK with a pack of information on how to educate children about Lyme disease. A copy of the email we sent can be found here.

LDUK’s Press Manager, Julia Knight attended the annual Bushcraft Show at Rosliston over the 3 day bank holiday to raise awareness about Lyme disease and how to prevent it. The event was a great success with over 400 awareness packs being handed out, 200 tick tools, tick repellent, 200 lime lollipops and lots of balloons! We received considerable donations from the many people who attended over the 3 days. Thanks must go to the organisers, The Bushcraft Show for inviting us back, Craig Fordham for loaning us the brilliant gazebo and for talking about his Lyme experience and Julie-Ann Gylaitis for coming along to help out. A big thank you to our campaign sponsors Mosi-guard Natural Insect Repellent and Tick Twister for providing tick repellent and tick tools. Thanks also must go to Julia’s husband John Knight who was promoted to “Logistics Manager”! 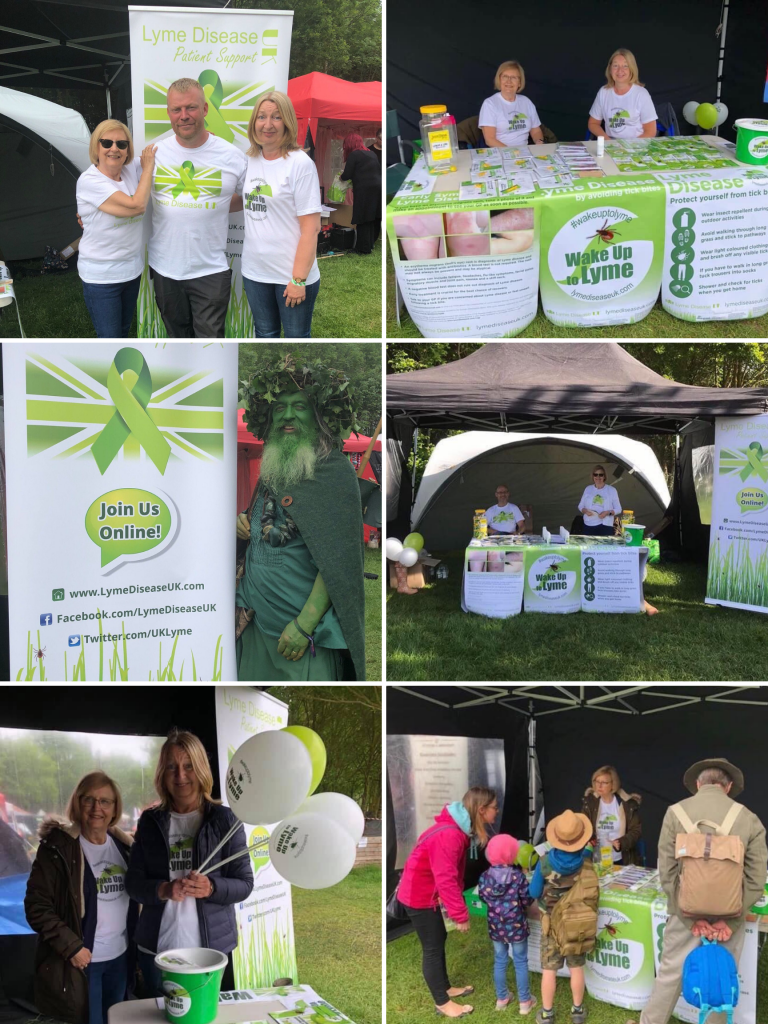 Paydens Pharmacy got behind our campaign and are displaying our awarneess materials across ALL 128 of their pharmacies across the South East of England! Thank you so much, Paydens! 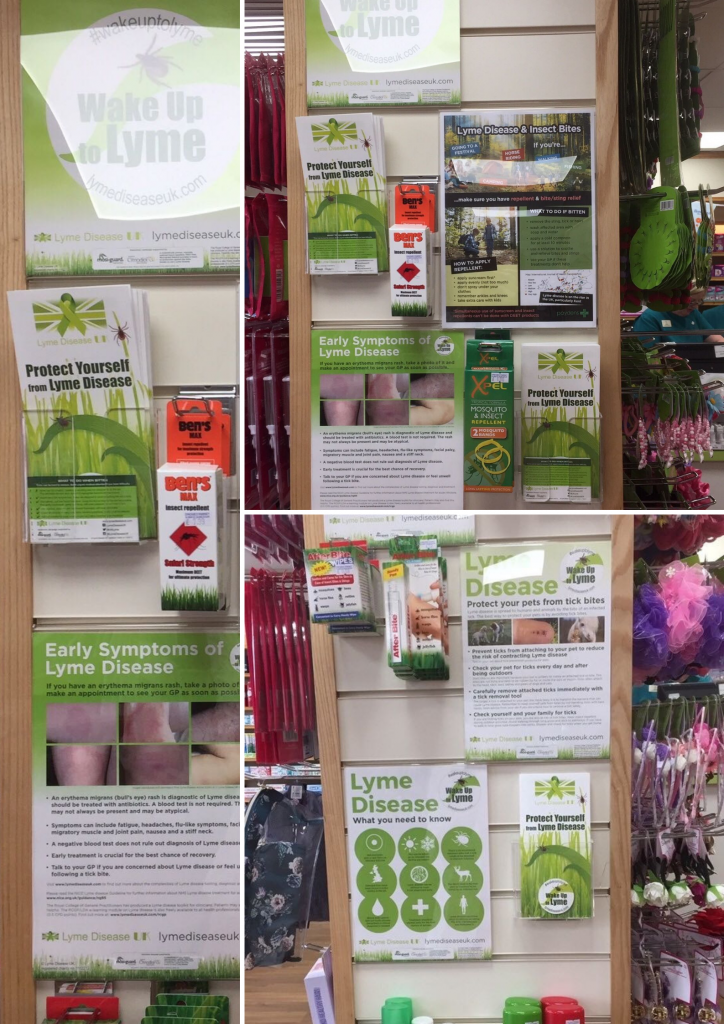 Encouraged by the campaign’s momentum, lots of fundraisers have been taking place for Lyme Disease UK. There are too many to mention but a special thank you goes to LDUK member, Angela Jones, whose husband Stephen is severely ill with Lyme disease. Angela held an awareness event where she works at a NatWest centre (part of the RBS group) in Bolton on the 8th of May. As well as raising awareness, she was also fundraising for LDUK and held a “Guess How Many Ticks were taken off the Lamb?” competition and also raised awareness with a group who were fundraising for the charity, Guide Dogs for Blind, in the same building. Thank you Angela for getting involved in our #WakeUpToLyme campaign! We’re so grateful! 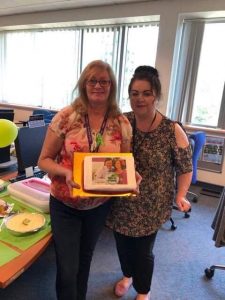 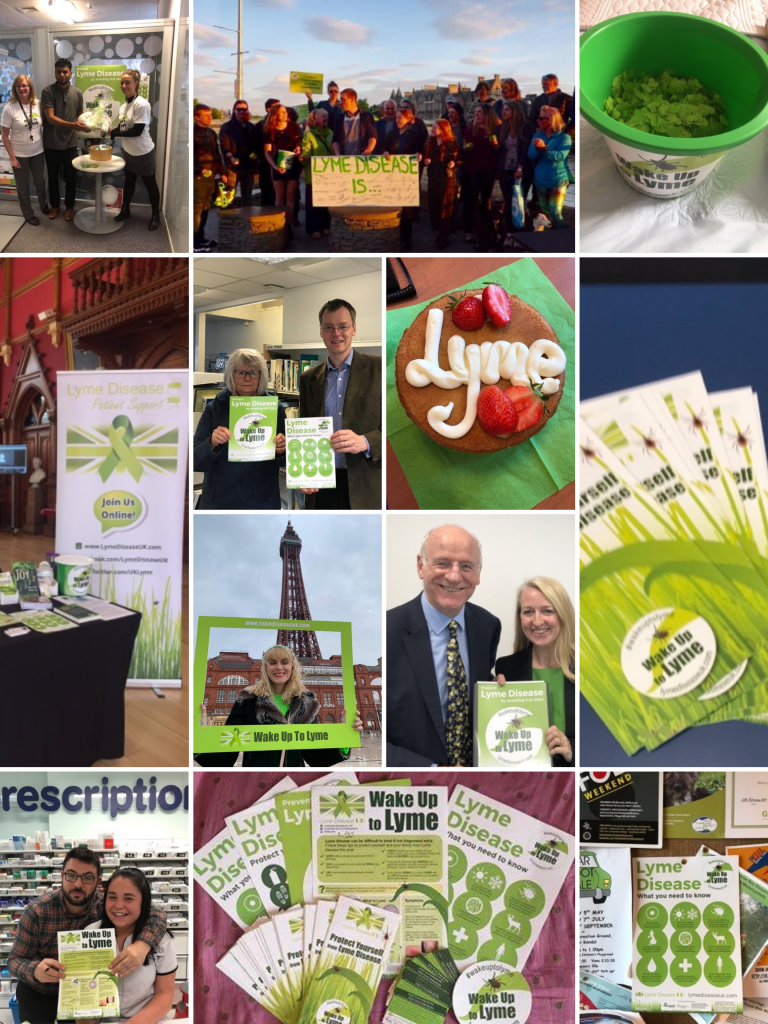 The Molyneux Community Centre raised over £500 for LDUK as Community member Yvonne Forey and her mother Maude Todd organised an Afternoon Tea Dance Fundraiser event and LDUK’s Sophie Ward attended. Sophie and Yvonne gave a talk on Lyme disease and the event included cakes, prizes and a raffle!

“Everyone at Molyneux came together and worked so hard  in supporting this event. Finding a balance with these kinds of events is key. You want to ensure that people become more aware and educated but you also want to have fun! Molyneux Community Centre achieved this and more. They are an inspiration for anyone wishing to host a fundraiser in the future. They are proof that a fabulous bunch of kind people, the local community, everyone coming together, support & fun makes an event TRULY a massive success.”
– Sophie Ward 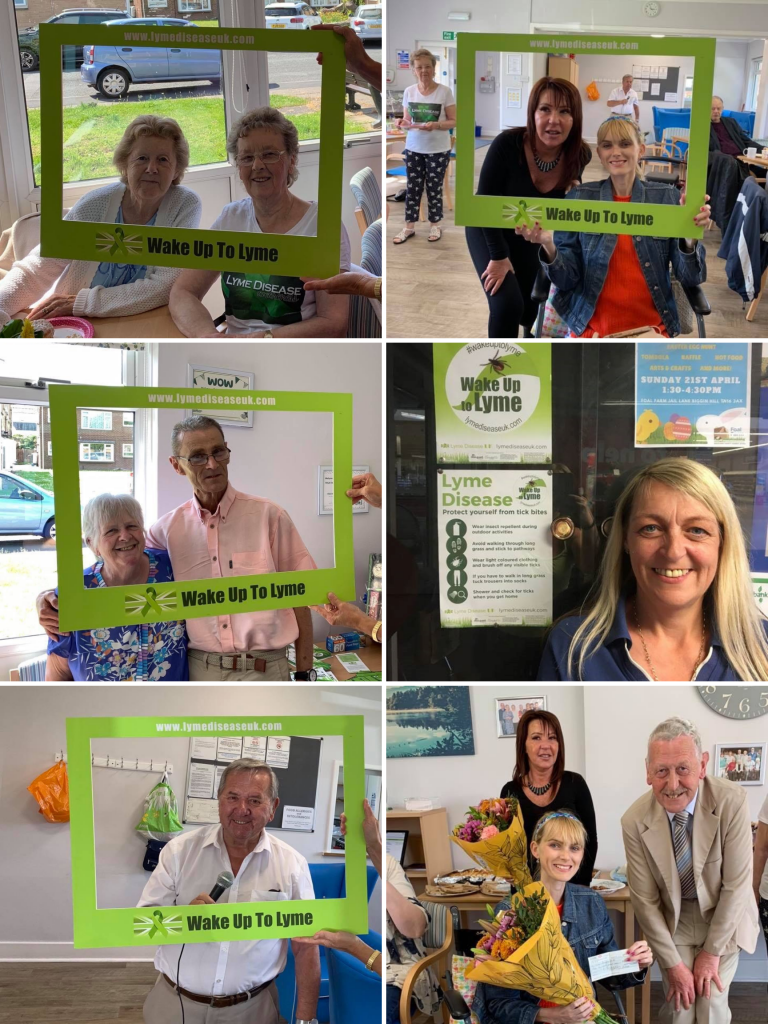 The Masons in Orsett also raised £500 for Lyme Disease UK and LDUK’s Georgia Madden went along to the Lodge to give a talk on Lyme disease and receive the cheque on the charity’s behalf.

Award-winning author, Lyme patient, campaigner and advocate, Andrew McGuinness, spoke at the Whitlit Whistable Literature Festival on Saturday 11th May. Andrew McGuinness discussed his writing and the motivations behind his latest acclaimed novel ‘Anatomised.’ Signed copies of Anatomised were sold at the event at the discounted price of £10.00 (RRP £12.99).

‘Anatomised – Inspired by true events, this darkly humorous story dives deep into the heart of one of the fastest-spreading, most controversial illnesses in the world: Lyme disease. When comedian Jack Mann and his wife Alice are affected, they are forced into a Kafkaesque maze of medical mishaps, exposing conspiracies and unearthing a tragic human cost.’ 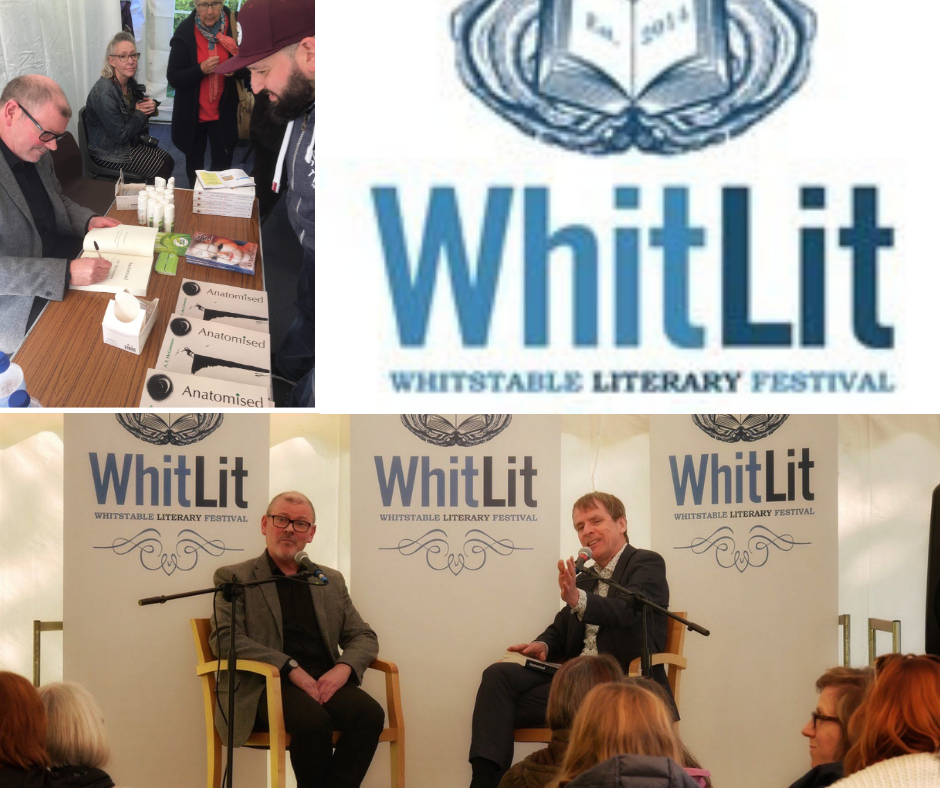 Julia Knight reached out to legendary Everton goalkeeper, Neville Southall, asking if he’d allow LDUK to host a Twitter Takeover. To our delight and surprise, he said yes!! So on a Saturday evening in May between 7pm – 9pm @UKLyme took control of @NevilleSouthall’s twitter account in order to educate his thousands of followers about Lyme disease. His followers were encouraged to reply to, like and retweet LDUK’S posts and comments. Thank you for entrusting us with your Twitter account, Neville! 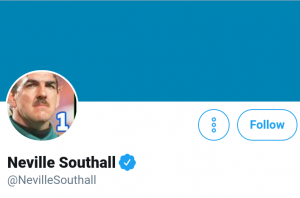 Morven-May MacCallum’s skydive for LDUK took place in July and her challenge and fundraiser can be found here. We were very relieved to hear that you landed safely, Morven-May! 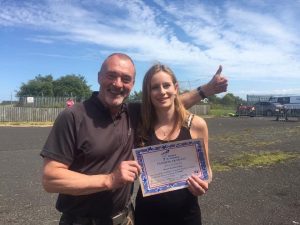 LDUK has won grants from easyJet and a £1000 Movement for Good Award from Ecclesiastical. We are so grateful to those who put us forward and nominated us.

Having achieved charity status this year, we hoped that this year’s campaign would be our most successful yet and we were not disappointed. Thank you again to everyone who got behind us and got involved and also to all the organisations who supported us. Our message was heard loud and clear! Remember that you can download awareness materials year-round here and if you have any specific awareness material requests, please email awareness@lymediseaseuk.com 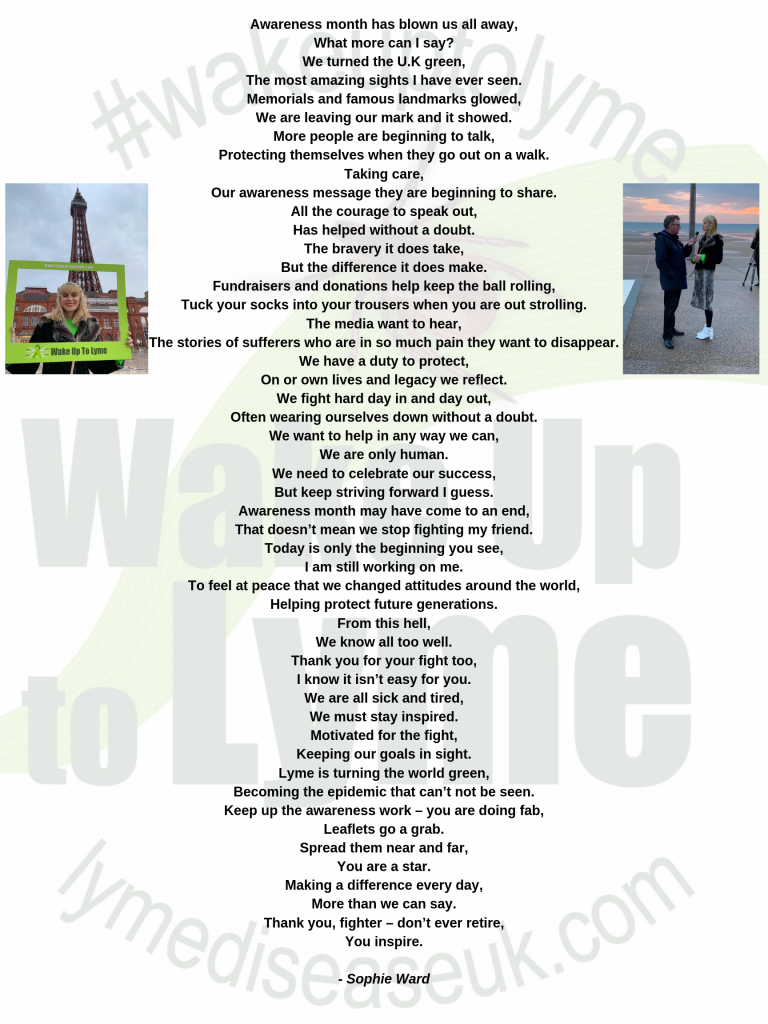