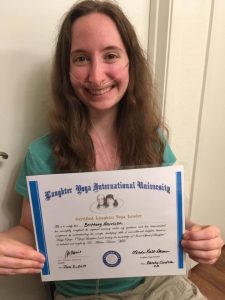 Hey there! My name is Brittany, I’m 24 years old, and I want to share my journey of recovering from Lyme disease and other chronic illnesses with the hope that it can inspire and help others! The story is a bit depressing at first, but I’m recovering now, so don’t worry!

Back in 2010 when I was fifteen years old, I became quite sick. I went from being a pre-professional dancer and honor student with an active social life, to being home bound and often bedridden. I was unable to read or do any schoolwork, and unable to leave the house except for carefully arranged appointments with medical specialists. Due to my condition, I was never able to finish high school or go to college.

I saw many medical professionals, tried many different treatments, and I did go to one clinic in Santa Rosa, California that helped me a lot. I worked with them from 2013-2016, but it wasn’t financially sustainable for me to keep working with them. In 2016 I also had to move, and there were lots of complications with the move, including exposure to mold and toxic chemicals. I ended up having a big relapse in 2017.

At first, it was a pretty dark time for me, but that relapse was actually what got me to try a brain retraining program, The Dynamic Neural Retraining System (DNRS), along with Laughter Yoga, and those are the things that have ended up helping me so much!

Over the past year I’ve been able to participate in online Laughter Yoga video calls, and it has made a huge difference for me!

Not only has Laughter Yoga had a profoundly positive effect on my symptoms, but it has also helped me to be able to connect with people and make friends!

I’ve been doing one laughter session every week on Facebook Live for the past three months. I’ve received many messages and comments from people letting me know how much my video sessions are helping them! Click here to watch a video of one of my recent Laughter Yoga sessions!

On June 1st and 2nd I was able to attend an in person Laughter Yoga Leader Certification course! It was so amazing to get to spend a whole weekend learning more about the benefits of Laughter Yoga, and how it all began. It also helped me to become a better laughter teacher, and I’m so excited that in July or August I’m going to be able to start offering online Laughter Yoga classes on Zoom.

I am no longer homebound, but I want to teach Laughter Yoga classes online for people who are homebound, or unable to attend in person Laughter Clubs. Because I know what it’s like to be completely isolated, and I know how powerful it is to be able to get on a video call with others to laugh and cheer each other on.

Where am I at in my recovery now? Although I am not fully recovered yet, I have made so much progress over the past two years!

I am so grateful for all of these fabulous improvements, and that catches you up to where I am now.

If you’d like to know more about me, more about Laughter Yoga, or see all of my past videos, check out my website here.