Lyme Disease UK received a donation this month from the QM Sapphires cheerleading team of Queen Margaret University, Edinburgh. LDUK community member, Janey Cringean, went along to a special event to accept the donation on our behalf.

She told us, “The event was an inter-university cheerleading competition involving different universities from all over Scotland. They competed in a number of categories and demonstrated a large amount of gymnastic capability. A larger than average number of ice-packs and ankle supports were also visible!” 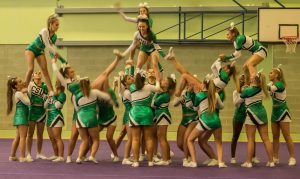 At the end of the awards ceremony, the QM Sapphires presented Janey with a wonderful donation of £300.

The team’s Treasurer, Callum Robertson explained that our charity had been nominated by Jo, a member of the Sapphires, whose mum has Lyme disease. Jo wanted to help increase awareness of just how serious Lyme disease can be and how important it is to prevent tick bites. 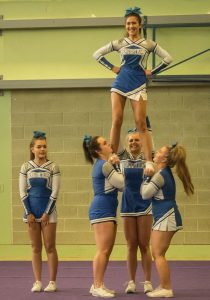 We’re very grateful to Jo and the team, and of course Janey, who gave a short speech about the disease and tick bite prevention to a room full of people. Janey told us, “It was a wonderful opportunity to educate 200 young people.”