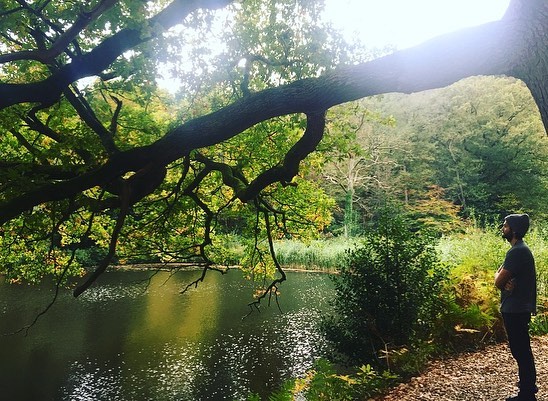 I lie half-crouching, half-prostrate upon dried mud littered with twigs and dead leaves. I am totally alert, poised, safely hidden behind tangled branches, ready to attack at a moment’s notice. I cannot see the enemy but I can hear them: the faint, unintelligible shouts of orders carrying on the wind. I wait, biding my time until…there! He is creeping slowly past me unawares, a look of pure determination in his eyes. This is the time. I leap from my natural enclosure, pointing my sturdy stick firmly at his flank, “Bang, Bang, Bang!” I shout victoriously. Before managing to face me he grips his chest, groans and slumps to his defeat.

These childhood skirmishes took place in Richmond Park (London’s largest royal deer park) twenty years before I knew anything about Lyme disease. If you would have told me then that thousands of infected ticks were themselves poised to attack the ten year old me, potentially ruining my life, I likely wouldn’t have taken you seriously.

And Lyme disease and its many co-infections are something to be taken very seriously indeed.

Before I met my partner Willow over a year ago, this life-changing illness was just an obscure factoid lying dormant in the recesses of my memory. I must have assumed it to be so rare it didn’t warrant much thought. So, considering that 2.4 million people are predicted to be infected with Lyme disease this year in Europe alone, why was I so blissfully ignorant?

In the UK Chronic Lyme is not officially recognised and has hardly any media coverage. People who suffer from it are often catapulted through a merry-go-round of misdiagnoses, ineffective treatments (three weeks of antibiotics) and what could be considered forms of abuse. I will not delve into the politico-economic mire of why this is, suffice it to say that those who do suffer from Lyme not only have to deal with its debilitating effects on their physical and mental health, but often don’t get the support they so desperately need: not from their health care system and—due to the tendency of most people to defer to official forms of epistemic authority—sometimes not even from their family and friends.

It can be terribly isolating.

Willow has told me about the countless GPs and consultants who, chained to an orthodoxy issued from on high by the BIA (British Infection Association), have often been rude, supercilious, leading and irascible. I myself witnessed this first-hand when I went with her to see one of these pain consultants (apparently something of a big player within the upper echelons of the medical community). I was utterly shocked with his behaviour. Not only because of his complete lack of anything resembling a bed-side manner, but also that he seemed eerily set on thrusting a diagnosis of fibromyalgia upon her. He did this even though she had initially told him she had been diagnosed with chronic Lyme, and repeatedly explained that most of her pain was localised. However, the infallible doctor had decided that such pain was “wide-spread” and ended the consultation by handing her a leaflet on the subject of fibro.

This was a small taste of what someone with Lyme has to go through. In the UK the only effective way to get treatment is to seek it abroad. As you can imagine the financial cost of requisite face to face appointments, antibiotics, stem-cell treatment etc. are way beyond the average person’s means. Though Willow is incredibly resourceful and had accumulated savings (originally put towards her BA) most of these savings were sucked into the whirlpool of misdiagnosis. The bulk of the money for her subsequent treatment came from the fundraising organised by family and friends.

And this money is fast depleting. Such a lack of means can be an acute source of anxiety and stress, and when you are healing stress is the exact opposite of what you need.

This is why raising awareness is so important. The more we attempt to understand this situation and engage with others about it, the more pressure we apply to the power structures engendering the cognitive dissonance plaguing our medical institutions.

It is beyond the scope of this piece to delineate the plethora of ways that Lyme and its co-infections can negatively affect a person’s health. This unpredictability and diversity, coupled with the aforementioned lack of funded research, results in what Willow ironically calls a “daily lucky dip of symptoms”. It is confusing enough to be beset by brain-fog and neurological problems without the fact you have no idea how you will feel one day to the next.

So where do I fit in in all this?

I am the partner of someone with Lyme. I love this woman deeply and utterly, but this last year or so has been a steep learning curve. When I first met Willow she was feeling great. After several years of disorientation and acute neuropathic pain it seemed like her health had dramatically improved. I had no idea what Lyme really was until she told me and I had a hard time fathoming the levels of discomfort she had experienced.

Most of us are ill-equipped to deal with this kind of suffering. At first we have no idea what we should do. For the socially conditioned ‘men’ among us, we often try to see it in logical terms: as a problem that needs to be fixed. We can get frustrated, angry, selfish, distant and depressed. It takes real strength to be there and administer the care and compassion required, to realise that this is a problem that might be beyond our power to ‘fix’. Such strength is something that must be learned and cultivated. If we truly love someone we must temporarily put our own fleeting desires to one side and help them to the best of our abilities. Sometimes this might be through saying the right words, or just quiet consoling; letting tears run if need me without trying to stop them. To totally respect their wishes, give them space if necessary, to understand that, no matter what’s going on in your world, even a shred of emotional resources can be galvanised into love and compassion. Most of the time whatever suffering you are experiencing pales in comparison to theirs.

We know that suffering itself is a universal human experience. It is an indisputable fact that everyone will suffer greatly at some point in their lives; how we learn from and approach this is a fundamental drive behind our self-development. However, the difference between emotional and physical pain is enough for me to draw a distinction. The former often allows us some space to reflect on our situation, whereas the latter can totally dominate our perception. It is hard to view the tyranny of physical pain as a catalyst for growth and wisdom when you’re in throes of it. If someone were to make such a remark to you in that moment you’d probably find it wildly insensitive and condescending. Yet, in a sense, experiencing this kind of acute suffering is akin to taking a crash-course in empathy. What I haven’t failed to notice is that many of those who have a chronic illness are incredibly kind, compassionate and empathetic. This is why Willow and I try and see, in the words of Ram Dass, “suffering as grace”. This unavoidable fact of life is a great and merciless teacher and we believe we are experiencing it for a good reason: to learn and grow on the path to awakening. Regardless of what you think about karma, Willow and I find that, by turning suffering on its head we don’t see it as a form of ‘punishment’ but one of spiritual liberation.

However, the cultivation of this kind of approach is far from easy. We are not the Buddha. We are frail, flawed, sentient beings in the midst of a long journey. Because of this we may struggle to stick to such a narrow path. I myself am recovering from a mental illness and my mother is in a psychiatric ward. Willow has helped me immensely with my own care and treatment and her support is invaluable to me. Such a relationship can of course be difficult at times as one might not have the emotional capacity to support the other. Ultimately however, the value of a shared understanding built on love and empathy far outweighs any ostensible drawbacks. Because of the difficulties we face, I have sometimes deviated from what I consider to be my love-bound duty to Willow. We have fought, we have argued and I have, on occasion, behaved like a teenager who couldn’t get his own way. But the important thing is that Willow and I always resolve our problems through communication. We don’t let resentment and dissatisfaction fester until it threatens to burst and cause damage to both parties. We breathe, come together and patch up our wounds. For her to have an intimate other who she can always rely on; someone who is constant and compassionate; someone who, despite bumps along the trail, is always trying to cultivate the necessary strength and resilience; to have this is to have a much-needed beacon in an often dark, isolating and hostile world.

I hope that one day I can truly be this beacon for her; one that never falters and never subsides.