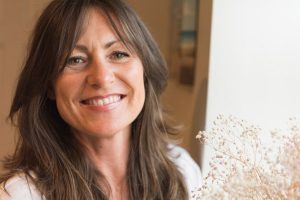 Hi my name is Kelly Williams and last year I started a campaign called Spreadalittlesunshine.  I wanted to raise £60,000 for someone called Sol who lives in Argentina and suffers from chronic Lyme disease. I didn’t even know Sol, she was a friend of a friend who I was supposed to meet up with when I went travelling in South America seven years ago. The rendezvous never happened, but we remained friends on Facebook.  I had heard she was sick and that it was Lyme disease but apart from that, I didn’t really know much more about Sol or about the disease.

Then in March 2017 I saw a post that someone had written about Sol on Facebook, describing how sick she was, that she had nobody to help her and that she was desperate. The person who had written the post was pleading, saying someone needed to do something to help her raise some money so she could go and get treatment in Germany.  I’ve no idea why but something in that post connected with me and I just couldn’t stop thinking about her. Day and night, I would keep coming back to it thinking about Sol and about how scared, alone and hopeless she must be feeling.

I started thinking; What can I do? How can I help her? I was wracking my brains for an idea. I knew that fundraising would be difficult, people nowadays are getting asked over and over to give to countless worthy courses. Fundraising for someone sick in this country would be hard anyway but fundraising for a middle aged woman, living in Argentina, suffering from a complex disease that was relatively unheard of in the UK, was going to be a real challenge. I knew it would be difficult sadly to get the public to connect with Sol and the disease, so I had to find something that the public would connect with and go with that. So, this is what I came up with at the time:

Sunshine4Lyme is a campaign that will start on 24th September and promotes acts of kindness and encourages people to be kinder to one another. To kick-start this campaign and to lead by example, my act of kindness was to complete 26 marathons in 26 days to raise £60 000 for a woman I’ve never met, to get the treatment she needs to help her heal.  When asked by the media why I was doing this and why I was helping someone who I had never even met, I answered “Sol is a human being who is suffering and she needs help, right now she feels hopeless, that’s why I’m doing this, to give her hope.”

Since starting the campaign, it’s gone from strength to strength. Currently I’ve raised £30,000. Fundraising is so much harder than I ever imagined, but the support from the public has been incredible. I’ve had to be extremely creative with my ideas to get people’s attention. At Christmas I even auctioned myself off on a date which caught both the public’s and the media’s attention locally and nationally and I managed to raised £2500. I have a small mountain of ideas that I will keep making a reality until I reach the £60 000 that I promised Sol.

Throughout the campaign I’ve done a lot of reading about Lyme, and I’ll be honest I’m no clearer now than I was back then as to the answers. I have my ideas and opinions like everyone connected to the disease does but the thing that I’ve realised throughout, is that until people stand up and take notice of all these people who are suffering from Lyme, these answers are never going to be found.  For months now I’ve been thinking “How can I help them? What can I do to get the public’s attention about the plight of all these people who are suffering?” The team at Lyme Disease UK are doing an incredible job of supporting people in a very practical and emotional way, John Caudwell is doing his bit lobbying the government and doing what he can from the top.  There are countless other organisations doing amazing stuff also to help. If I’m being totally honest I’ve not felt comfortable standing on my soap box shouting about ticks and the complexities of the disease. It just didn’t feel right as I don’t understand the disease enough to feel confident in doing that.  After twelve months of wracking my brains, I’ve finally come up with an idea that I really believe will really help.

“Sunshine4Lyme is a campaign that supports people in need by giving them hope, showing them love and spreading happiness.  That is what I want to do now, not just for Sol but for everyone else suffering from Lyme”.

So this is my idea:

I’m going to launch a 7 day Sunshine Kindness Challenge.  I’m going to get publicity for the launch by doing a “Big Sunshine Walk for Lyme” which is when I will start walking and not stop until my legs will no longer carry me.  This will be on a Saturday running into Sunday and along my path, I’ll be handing out 500 happy bags, 1000s of 7 day sunshine challenge cards (an act of kindness a day for 7 days) and dropping 1000 lucky pennies as I go.  It’s going to be videod and shared hopefully, but the message I want to put out there is that:

“Sunshine4Lyme supports people in need by giving them hope, showing them love and spreading happiness and right now the people suffering from Lyme need hope, and that’s what we’re going to give them”.

The idea of the walk is to start to get some media attention, but the biggie is going to come on the Monday when we’re going to get as many people as humanly possible to start the 7 day Sunshine Challenge.  Each day when they have done their act of kindness, they will post what they have done on social media (ideally with a video or a photo if that’s more comfortable) They will then nominate 3 friends to also complete their own Sunshine challenge.  There will be no donating from the 7 Day Sunshine Challenge, I want it to just be about spreading love, hope and kindness and raising awareness about the plight of the people suffering from Lyme spreading the hashtag #sunshine4lyme

I believe that if we can get the whole of the Lyme community and the general public behind this #sunshine4lyme campaign it could really work! I truly believe that if we work together we can create the next ice bucket challenge but for Lyme.  If we pull together, we can really create a big noise and also spread a lot of happiness at the same time.  It would show people who are suffering from Lyme in a really positive light, people I think would sit up and listen.  The whole community coming together doing something positive.  My plan is to get as many Lyme organisations and Lyme influencers to back this, then hopefully they will inspire others to follow suit. Creating a wave of awareness and kindness all in one go.  Making a noise but in a way that I genuinely think people will sit up and listen too. If we all act together, I truly believe we can make this work. Hopefully by doing this it will give Lyme disease and the people who are suffering, the love and hope and help they need to get their lives back.