In 1999 I was a highly qualified Specialist Nurse Practitioner, Paediatric Nurse. I had spent the last 12 months setting up a Community Children’s Nursing Service in Lincolnshire – the first in that part of the UK. I was due to start my Master’s Degree in NHS Management, and was also set to teach part time, at Nottingham University on a degree course for paediatric nurses wanting to become children’s community nurses. Life was good. 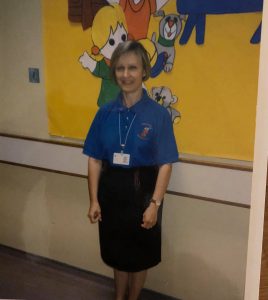 At the end of April 1999 my family had a short break at a forest holiday centre in Thetford, Norfolk. I had no idea what was about to befall me.

Whilst enjoying the outdoors, “something” bit me behind my left armpit and the area was irritated for about six weeks. I now believe it was a nymph sized tick – the kind that are easy to miss.  Weeks later, I felt unwell but nothing too specific. I felt run down and not quite myself but had no idea why – I didn’t have an obvious virus or infection until I developed huge dark blue bruises on my legs, and was seen by a Haematologist to rule out any blood disorders.

All tests returned normal, aside from very low ferritin (iron stores). Life went on as usual until October: I was sleeping much more than usual and collapsed at work, during a lecture. I felt like I was under water with people’s voices around me blurred and hazy. This happened a further three times in the following two weeks and I was rushed to hospital.

All tests returned normal apart from an occasional arrhythmia in my heart.

My health began to plummet like a pack of cards with a myriad of symptoms that would change on a daily basis.  By Christmas I could no longer care for myself and had intractable insomnia. Days would go by with no sleep and I was eventually diagnosed with ME. I never accepted this diagnosis as I didn’t have the telltale fatigue that ME sufferers have. My body just seemed unable to function, whether that was walking, talking or swallowing.

The symptoms and illnesses came in phases. I felt like I was going mad. About 14 months after the original onset, I was in such despair that I tried to take my own life.

Happily I lived to tell the tale.

For the next seven years I basically lived on the sofa and did nothing else. But over the last decade I have slowly made some progress and almost appear to be ‘normal’ from the outside, but I still have many neurological symptoms that interfere with daily life.

In 2016 I read an article written by John Caudwell about his family’s struggle with Lyme disease. My symptoms coupled with that irritated bite back in 1999, fitted the picture perfectly.

I also discovered that the area of Norfolk we had visited is a high-risk area for Lyme disease. If only I’d have known.

I paid for private testing in Germany that confirmed what I already knew, Lyme disease is and was at the route of all my health issues. I am now undergoing an extensive course of antibiotics, to kill off the Lyme bacteria which has made my body its home. It could take years to kick it into remission but now I have the answers, I am hopeful my symptoms will improve.

So to loop back to the title of my blog, what has this illness, misdiagnosis and lack of treatment truly cost me?

I think the total financial cost to both me and the NHS is incalculable, from GP appointments to diagnostics investigations. Personally, it has cost me my health, my career, the ability to be a proper mother to my children for a bulk of their lives, my first marriage, and my home.

The NHS lost a highly qualified health professional that they’d invested a lot of money in through my training, CPD and two separate degree courses.

The Government has granted me thousands in what was Incapacity Benefit and Disability Living Allowance – it goes without saying that I would’ve much rather be healthy and in work that have to receive benefits.

Because the Lyme disease was left untreated for so long, it has caused lasting damage on my body. My gallbladder had to be removed in January 2016 and a few weeks later I had an endoscopic ultrasound that showed heavy pancreatic damage… the sort you’d expect from an alcoholic! I’m a life-long tee-totaler and non-smoker. To say I was shocked and upset would be an understatement; this sort of damage is life-altering at best.

This entire ordeal could’ve been prevented if I had been diagnosed during the acute stage of Lyme disease, and treated with several weeks of antibiotics. My whole life would be a different picture.

From my professional background you might say I should have been clued up on Lyme disease but the truth is, Lyme awareness was almost non-existent in the UK in 1999 and I had unfortunately, never heard of it. There are plenty of stories in the media these days about unsuspecting victims who have had their lives ruined by Lyme disease, but awareness amongst health professionals is still a key problem that needs addressing.”

What you can do to help with awareness:

What you can do as a clinician: