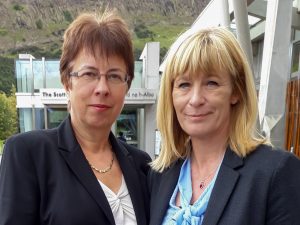 Janey gave a five minute introductory presentation on Lyme disease, the incidence in Scotland, and issues with testing and treatment. She called on the Scottish Government to follow France’s example by doing more to improve testing, create better guidelines, set up a specialist Scottish treatment centre, provide more resources for research and development, and educate medical professionals and the public. Presentations were followed by 30 minutes of questions from members of the committee.

Alexander Burnett MSP closed questions with a statement on his parliamentary motion.  He stated, “This Parliament has a responsibility both to sufferers and to countryside users. … We are failing them and being negligent in informing them of the grave dangers that exist. It is clearly a disease that is not getting the attention it needs. I hope that the Scottish Parliament takes the opportunity to catch up with so many other countries that are dealing with it.”

The committee decided to take the petition forward by consulting with interested stakeholders including government bodies, health organisations, charities, and outdoor organisations. Janey and Lorraine will be given an opportunity to provide a written response at a later date.

The meeting can be viewed here.

Well done to Tick-Borne Illness Campaign Scotland and to all involved.