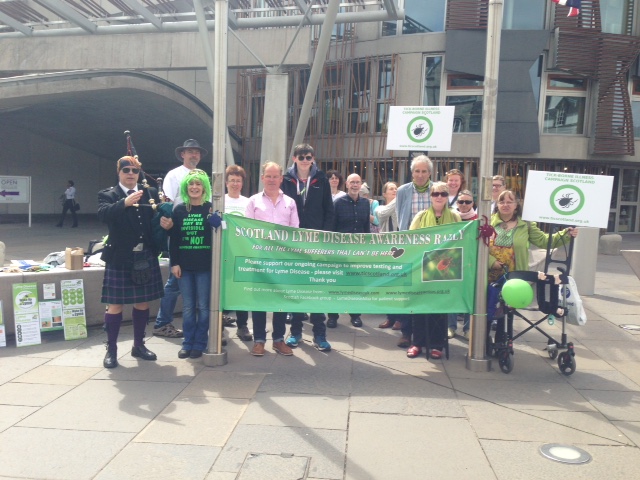 Lorraine Murray shares her account of the day with LDUK:

“Scottish Lyme disease sufferers held their very first awareness Rally in Edinburgh on 24th May 2017 this year. All in attendance were ordinary people that this disease has sadly affected. Many brought along family members to show their support and they stood together to help members of the public. They provided information on Lyme disease using LDUK leaflets and posters, LDA leaflets and chatted to the public all about Lyme disease and probably more importantly, about any early symptoms that would occur should someone miss a tick or not develop a bull’s-eye rash. The age range of those infected was 16 to 60 years old, both male and female. “Ticks are not fussy, this can affect anyone!”

A group of us got together on the Scottish Facebook support group, LymeDiseaseAlba and decided that we had to try and get information out to the public by providing useful information about the effects of Lyme disease to further educate as part of a global awareness campaign supported by LDUK.

I set the date as many were keen to help and we gathered all the things we thought would help to educate the public. The day was a huge success! We achieved what we set out to do and now, with special thanks to our small team, many people will be so much more aware of Lyme disease – we made quite an impact! We also got the chance to swap stories amongst ourselves and one member even brought along her own Piper of which created a very moving but positive feel on the day!

The Scottish banner was dedicated to all the Lyme disease sufferers at home who couldn’t be with us. Unfortunately many people up and down the length of Scotland are still very ill and desperately require treatment. 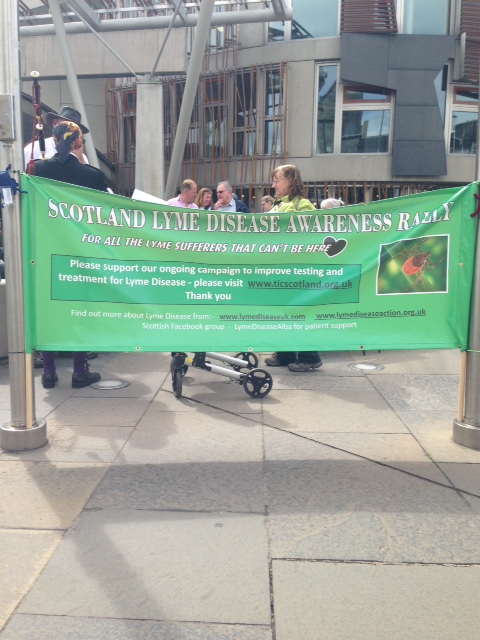 As it stands at the moment there is no adequate test available in Scotland or the UK to accurately diagnose Lyme disease. Many are still going undiagnosed or misdiagnosed with other conditions such as chronic fatigue/ME and others. Most go on to suffer some of the most horrendous symptoms from severe neurological problems, fevers, flu like, painful joints, heart conditions, complete exhaustion and so on. Lyme has been called the ‘great imitator,’ mimicking so many other conditions and so spotting early symptoms is crucial as treatment is very limited and many infected that have been left for years have to source their own private treatment which is expensive in every sense of the word – we are talking thousands!

Because of this lack of awareness amongst the NHS, the unreliable testing and inadequate treatment available as well as the fact that GPs are not being adequately trained to spot the earlier signs, we have launched a Scottish petition to address all these areas, calling on the Scottish Government to do more.

“I’m asking everyone to please get behind us and support this for much needed change. It is not right to leave Patients/Children/Elderly with serious bacterial infections, the consequences can be fatal for some! I for one can’t stand by and watch this happen to the thousands that can’t afford treatment in Scotland, what happens to them? We must protect our future generation.”

More about the Scottish petition:

Scottish Lyme Disease patients failed by current medical treatment are campaigning for improvements in testing,  treatment and awareness. Scottish Parliamentary Petition has been launched and we hope that the public in Scotland and beyond will support us by signing it. The petition can be signed here.

The petition is calling on the Scottish Parliament to urge the Scottish Government to improve testing and treatment for Lyme Disease and associated tick-borne diseases by ensuring that medical professionals in Scotland are fully equipped to deal with the complexity of tick-borne infections, addressing the lack of reliability of tests, the full variety of species in Scotland, the presence of ‘persister’ bacteria which are difficult to eradicate, and the complexities caused by the presence of possibly multiple co-infections, and to complement this with a public awareness campaign.

LDUK are attending a Scottish parliamentary awareness event for Lyme disease hosted by Alexander Burnett MSP on 14th June and so we hope to share our campaign with MSPs and local organisations to further educate people on the dangers of tick bites and preventative measures.