Recently I’ve noticed that as I’ve been recovering, I’ve been changing my targets for wellness. By moving the goalposts without even realising, I’ve been feeling like I’ve not been making progress. Only when I’ve stopped to think about the real changes can I see past the disappointment that I’m not yet 100%.

This time last year I was just getting back to work after 2 months signed off sick and practically bedridden. I wouldn’t make it in until around 1pm as I was so exhausted and fogged up that it took me all morning to get ready and drive to work. These days I don’t make it in until 11 or 12. I was feeling like I hadn’t made much progress, after all I’ve only gained an hour. But actually, stopping to think properly, I don’t make it in until 12 because I’m still needing to sleep 10 hours a night but I wake up feeling refreshed as a result of my late morning. I do some housework before I go as it’s easier in the light. And then… I get on my bike and cycle into work. This time last year I dreamed of being able to cycle into work again but it was just impossible. As the recovery progressed the ambitions slowly slipped from occasional cycles, to cycling daily to work, to my current ambition of cycling into work on time. It was such a subtle changing of my ambitions that I didn’t notice it and just kept feeling in the mindset of still having so far to go.

So basically this is a really long way of saying, each week or month, stop and think about how far you’ve come and how many goals you’ve passed by without even realising. Don’t just push the goal a bit further away each time you reach it, stop and celebrate it before going for the next one. I’m going to be writing out the few remaining bits of life I have to regain so that I can tick each one off and be thrilled at my progress instead of wishing I was at the end already. 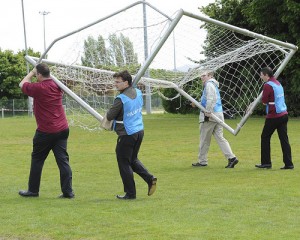